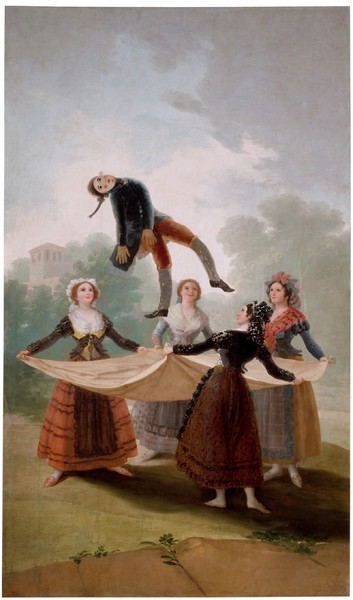 The Straw Manikin used one of the identically sized stretchers included on the invoice of the carpenter Alejandro Cittadini. The other one was for its companion piece,Young Women with Pitchers.

The painting shows four women, arranged in a circle, tossing a life-size straw manikin up and down in a blanket. Tomlinson sees this figure as far more than just a doll, however, stating that his painted face and marked femininity identifies him as a petimetre.

Cruzada Villaamil believed that the tapestry of this work was to adorn the bedroom of the Infantas, but Sambricio correctly relocated it to the palace of San Lorenzo de El Escorial, the place where the tapestry was in fact found.

The Straw Manikin has been interpreted in several different ways. On the one hand it fits in with the meaning of the works with which it would have shared a wall: The Wedding and Young Women with Pitchers, symbolizing man's fall into the clutches of woman. A later version of this same subject can be found in the print Feminine Folly.

Victor Chan, however, finds in this work a clear parallelism with the political instability of the period. He believes that the women forming the circle represent the seasons of the year, turning the wheel of fortune. Around the time the painting was made, Cabarrús, Jovellanos, Campomanes, Floridablanca and Aranda were all forced to abandon their posts, and this may have led Goya to reflect upon the volatile nature of time and fortune. Tomlinson lends her support to this hypothesis, pointing out that this series contained several works depicting physical instability, such as The Stilts, Boys Climbing a Tree and Chicken Fight.