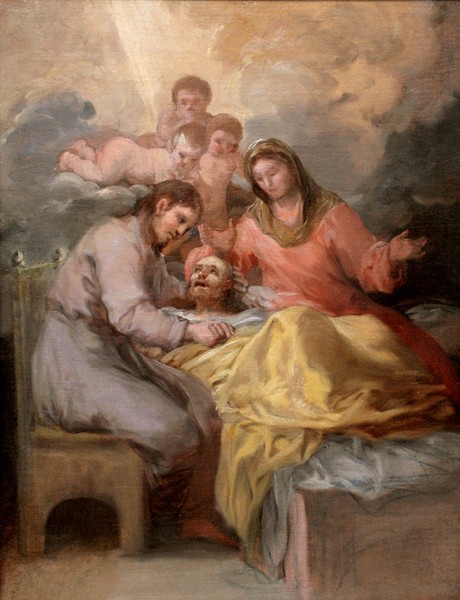 This work belonged to Aureliano de Beruete y Moret. It then moved to Berlin and the collection of Otto Gerstenberg, who acquired the painting from Beruete's widow in 1929. In 1967 it was bought by the Flint Institute of Arts.

This painting seems to be an initial idea rather than a sketch, a preparatory study which Goya evidently later rejected, given that the composition presented here is very different from that of the final piece. The painting is executed on a light ground and an underlying drawing is clearly visible.

This work is so different from the final painting produced that some academics doubt its authenticity. The most likely scenario is that this first concept was followed by other sketches which are not available to us today. However, as Camón has pointed out, it is beyond doubt that the painting is in fact by Goya, as demonstrated by the free and audacious brushwork so characteristic of Goya's work. This composition is more baroque, and the artist eventually chose to adopt a more classicist style, in harmony with the church where it was to be housed.

The composition has great depth, and the foreshortened bed focuses our gaze on the dying Joseph. The iconography of the work corresponds to representations from the 17th century based on the apocryphal medieval account of the death of Joseph, supposedly related by Jesus and studied by E. Mâle. Saint Joseph lies on the bed with an expression of fear and anguish on his face. He is accompanied by Mary and Jesus, who patiently attend him, comforting the dying man. The humanity of the depiction of Christ is particularly noteworthy. Above the group we can see small angels reminiscent of those who witness the last moments of Saint Francis Xavier in the work Death of Saint Francis Xavier housed in the Museum of Zaragoza.

The so-called "architectural style" which Goya eventually adopted for the final painting located in the monastery in Valladolid, while it is impressive in its solemnity, has lost something of the anguish which Joseph suffers in this initial sketch, and - above all - the tenderness expressed by Jesus towards his putative father.