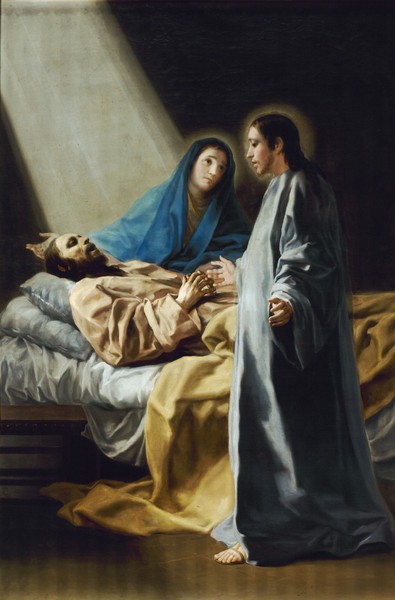 The church of the monastery of Cistercian nuns in Valladolid was renovated in neoclassical style by Francisco Sabatini between 1781 and 1787. The same architect suggested to Charles III that Goya and Ramón Bayeu should be commissioned to paint the six altar paintings for the lateral chapels. Goya executed the three situated on the Epistle side, depicting the themes Transition of Saint Joseph, Saint Bernard and Saint Lutgardis. Ramón Bayeu was responsible for the four paintings for the three altars on the Evangelist side of the church, dedicated to The Virgin with Saint Francis of Assisi and Saint Anthony of Padua, Saint Benedict and Saint Scholastica.

The consecration of the church took place on 1 October 1787, at which point the paintings would have already been finished, doubtless later than planned, since the initial end date for the work was the Feast Day of Saint Anne, on 26 July.

This commission saw the rivalry continue between Goya and his brothers-in-law, who had already had a "confrontation" over the work for the Basilica of San Francisco el Grande in Madrid, following the conflict in Zaragoza over the cupola of the Basilica del Pilar. Ramón Bayeu also understood the situation as such because he could not forgive Goya's professional success. Moreover, he had been left out of the previous commission, and he therefore put a great deal of effort into his works.

As in the case of the Christ on the Cross in the San Fernando Academy, now in the Prado Museum, this set of works is steeped in controversy. Many of the artist's critics decried the lack of religious feeling, the vulgarity and lack of vitality of religious works that they felt were executed without feeling, as a craftsman and not as an artist. Camón Aznar did believe Goya's talent to shine through in these works, praising the chromatic shading, chiaroscuro, the grandiosity of the figures, which he described as natural, and the idea of religious feeling which Goya has during this phase, reminiscent of the art of Mengs's circle and the Italian school. Sánchez Cantón insists that this set of works mark Goya's maturing as a religious painter.

In this image, we see Mary and Jesus accompanied by the lifeless body of Joseph, who died at the age of 111, according to traditional accounts. Mary gazes at her son with a pained expression, while Jesus extends his arms in a gesture of prayer, asking God to take Joseph to his side.

The Transition of Saint Joseph is characterized by strong contrasts of light and shade. A divine ray of light illuminates the scene from the top left-hand corner, as if it came from a lantern hung in the church itself, bathing the body of Joseph in light while leaving other areas of the composition in gloom, giving an austere feel to the work. The other highlighted areas in the scene are the halos above the heads of Jesus and Mary.

As in the Annunciation, the faces in this painting have classicist features and the figures are monumental, once again shown from a low viewpoint. In terms of the colours used, the blue of the Virgin's mantle, the yellows of Joseph's dress, the grey of Jesus' tunic and the white of the sheet contrast with each other in a subtle harmony reminiscent of grisaille work, contributing to the sadness of the scene. The folds of their clothing fall naturally. Thanks to Sambricio, we know that among the materials received by Goya to carry out the work (oils, pigments, and so on) there were "twenty-three varas of holandilla linen in Blue and Crimson to make a mantle and a tunic" and the services of a seamstress, which suggests that Goya probably studied mannequins for this work, as it is supposed that he did for his large-format paintings.

The set of works as a whole gives off a sober feel, integrating perfectly with the architectural surroundings.

The geometric composition is also sober and of an "architectural style", as Goya himself commented, here expressed by the vertical line of Christ's posture, the diagonal represented by Mary, and the horizontal line of Joseph's body. The forms are given a very plastic feel by the ordered hanging of the fabrics and their monumentality, their sculptural treatment.

Since Goya's father had died shortly before this painting was produced, it has been posited that this work was intended as an idealized portrait of the artist as the Redeemer with his parents, whose physical appearance is not known to us. Although the composition could be said to be cold and solemn, the emotions expressed by the figures denote a personal interest in the subject which adds to the sadness of the scene.