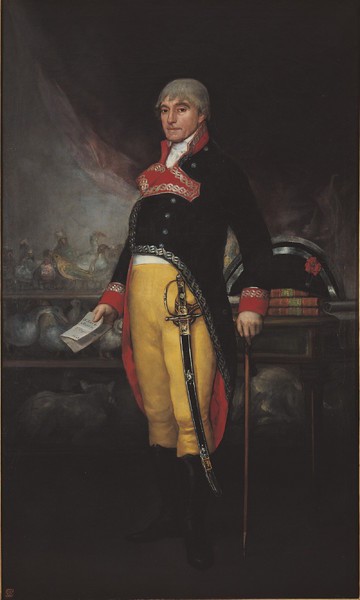 This painting remained in the possession of the sitter's family for several generations until coming into the possession of Don José Jordán de Urriés y Azara, whose family took it to the Museum of Zaragoza in around 1955.

In the early 1980s it was acquired by Ibercaja, being kept in their head office until 2008, when it was moved to the Camón Aznar Museum, in Zaragoza.

Don Félix de Azara (Barbuñales, Huesca, 1746-1821) was a naturalist, geographer and seaman, who entered the military corps of engineers at a very young age. He took part in the battle of Argel, where he was injured, and later travelled to Río de la Plata, where he exhaustively catalogued the area's flora and fauna, publishing his findings in several volumes. He was the brother of the diplomat José Nicolás de Azara.

Shown here in front of a background that contains several stuffed animals, in reference to his work as a naturalist, a curtain and a table, on which rest his hat and three of the books written by him, stands the figure of Don Félix. He is in military dress, with a dark dress coat with red collar, sleeves and lining. Against his yellow trousers he wears a sabre, adorned in gold. In his right hand he holds a piece of paper with his name, the artist's name and the date the work was completed, whilst his left hand rests on top of a baton, symbolizing his position of commander in chief.

His expressive face reveals a person who is sure of himself and proud of his profession.

It is interesting to note the differences between the slightly sketchy brushstrokes of the animals and the highly detailed, meticulous way in which the clothes, face and head have been rendered.