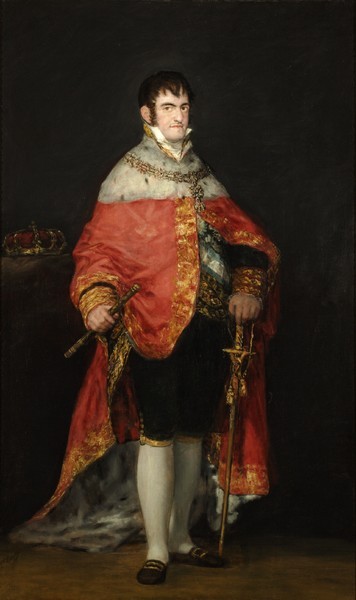 Upon Ferdinand VII's return from exile, and by Royal Order of 1814, Goya was commissioned to paint this portrait and its companion piece, that of the Duke of San Carlos, by the Junta of the Imperial Canal of Aragón. It was Don Martín Garay, the canal's patron, who settled the bill of 19,080 reales with Goya and who received the two portraits once they were finished. They were placed in the Casa del Canal, in the Plaza Santa Cruz in Zaragoza, specifically in the so-called Sala de Protección, later known as the office of the Chief Engineer. Given that the two men's ties to the Imperial Canal of Aragón do not appear to warrant any commemorative portrait, its commissioning was most likely motivated by the king's vanity, from which his minister would also have benefited.

Both works remained in the palace of the Casa del Canal until, in the summer of 1819, a fire in the neighbouring buildings resulted in them being urgently moved to the Casino Principal. On 20 June 1921 they were taken to be stored at the museum, where they were installed in the etching room until the room dedicated to the works by Goya was ready.

This portrait of Ferdinand VII is a full-length one, as befits such an important figure. Of the many portraits that Goya made of him, this is one of the most successful ones, although compared to the companion piece it is still not of such brilliant execution.

Dressed in a black outfit with golden edging at the knees, holding up his white tights, the king is covered by a vivid red mantle, lined with ermine fur and trimmed with golden needlework. Visible underneath this robe is the sash of the Royal Order of Charles III and, on top of the ermine, hangs the ostentatious necklace of the Golden Fleece. In a very majestic pose, he rests his left hand on the hilt of a golden sword, whilst his right hand holds a sceptre. The king's face reveals with complete naturalism his unattractive features, along with his distrustful and obstinate character. Behind him, almost lost in the murk of the black background, is the king's crown, on top of a table.

The quality of the light on the robes of state are exquisitely executed, as are the highlights on the gold and the details of the various decorations worn by the vane Ferdinand VII.

The inscription with the signature is apocryphal.