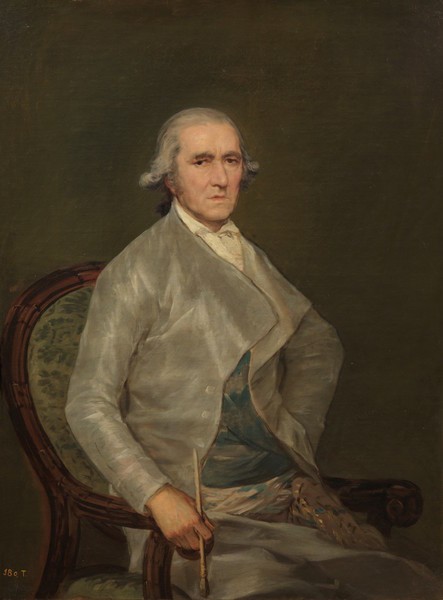 This portrait was painted immediately after the death of Francisco Bayeu. It was commissioned by his daughter and exhibited whilst still unfinished at the Royal Academy of Fine Arts of San Fernando, Madrid, in 1795.

The Museum of La Trinidad, Madrid, acquired it in 1866 from Andrés Mollinedo for the sum of four hundred escudos. From that institution it went to the Museum of the Academy of San Fernando, and then to the Prado Museum in 1872, but it was not put on display there until after 1876, remaining in storage until that time.

Despite the fact that Goya knew the physiognomy and features of his brother-in-law and master very well, in order to produce this painting the artist must have used a well-known self-portrait by Bayeu (Madrid, Royal Academy of San Fernando).

The figure is shown seated in an armchair, his face somewhat gaunt. In his right hand he holds a brush, with the additional accessories of the canvas and the palette that appear in the self-portrait that served as a model having been eliminated. The range of colours used in very limited: greys and greens in the dress coat, the waistcoat and the sash, which in turn are played off against the shine of the fabrics, giving the subject a great air of elegance.