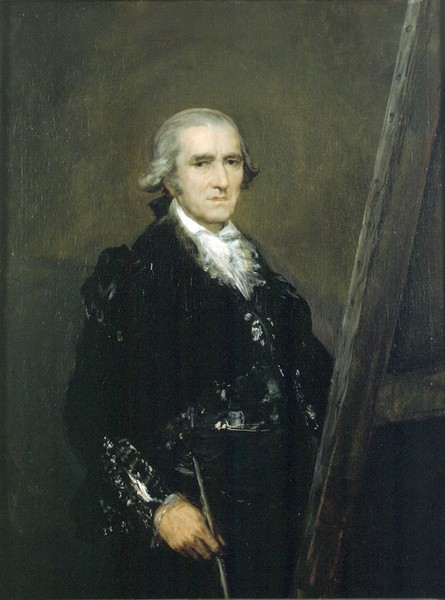 The painting of this portrait has been interpreted as an expression of Goya's gratitude to his brother-in-law, Francisco Bayeu, for recommending he be named painter to the king (1786), an event that would have marked the end of a period during which the two men had grown apart and which began in Zaragoza in 1781 with the painting of the cupola of the Regina Martyrum.

This work came from the collection of the printmaker Benito Monfort who donated it to the Royal Academy of Fine Arts of San Carlos, Valencia, in 1851.

The painter Francisco Bayeu y Subías (Zaragoza, 1734-Madrid, 1795) received his early training in Zaragoza, and was heavily influenced by the presence of Antonio González Velázquez. In 1763 he moved to Madrid, summoned by Mengs to help him with the decoration of the Royal Palace, and that same year he was named Academician of Merit of the Royal Academy of Fine Arts of San Fernando. In 1765 he was given the post of Deputy Director of Painting of this institution. In 1767 he was named Court Painter to Charles III. In 1788 he became Director of Painting at San Fernando, achieving the pinnacle of his career by being named General Director of the academy in 1795, just before his death.

In this portrait he appears in flamboyant black finery, with a white shirt complete with frills, standing before a canvas, ready to paint. In his excellently rendered right hand he holds a brush.

The subject appears before a neutral background, thereby emphasizing the sense of volume and focusing the viewer's attention on the figure rather than on other, superfluous details. The strong, expressive face grabs our attention with its penetrating, vivid gaze. Grey and black tones dominate the painting, giving the whole an air of elegance.