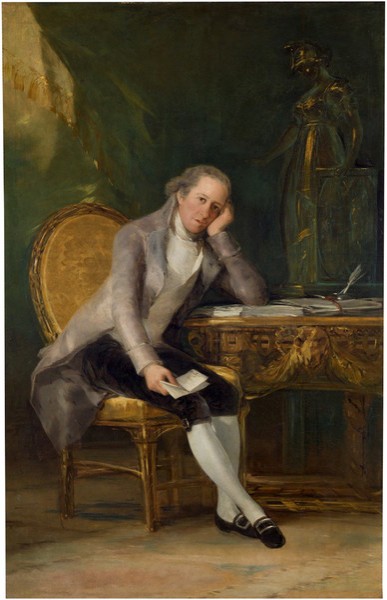 Jovellanos / por / Goya ("Jovellanos by Goya", on the paper that the sitter is holding in his hand).

Jovellanos left this painting to Arias Saavedra in his will. Its next known owner was the antique dealer Mariano Santamaría (Madrid). By 1928 it was in the collection of the Duchess of Torres, in Madrid. At the time of the Paris exhibition of 1961-1962, the owner was the Viscountess of Irueste. The Ministry of Education purchased it in 1974 for the Prado Museum, and it was first mentioned in the museum's catalogue in the 1985 edition.

Gaspar Melchor de Jovellanos (1744-1811) was a prominent lawyer and one of the most important intellectuals in enlightened Spain, as well as a great lover of the arts and sciences. Appointed Madrid Court Judge in 1778, two years later he was elected academician of the San Fernando Academy of Fine Arts, Madrid. In 1798 he was named Minister of Grace and Justice of a short-lived reformist and progressive cabinet. He wrote a number of essays on economics, politics, agriculture, philosophy and customs, the objective of which was a transformation of the country.

The subject is depicted seated in a chair, one elbow resting on a desk that is covered with papers and books, absorbed in his thoughts and with a certain melancholy air about him. His face transmits perfectly his serene, intelligent and thoughtful personality. His pose is both elegant and relaxed, and his clothes, very sober and utterly devoid of any decoration, consist of a grey dress coat, dark trousers, white stockings and black shoes with silver buckles.

In the background, on the left-hand side, is a drawn-back green curtain with gold trimming. On the right there stands a statue of Minerva, goddess of wisdom, the arts and the sciences, who appears to be extending out to the sitter her right hand in a protective gesture, whilst her left hand rests on a shield bearing the arms of the Royal Asturian Institute of Navigation and Mineralogy, a body founded at the initiative of Jovellanos.

The portrait was made shortly after Jovellanos was named Minister of Grace and Justice, at the highpoint of his career.