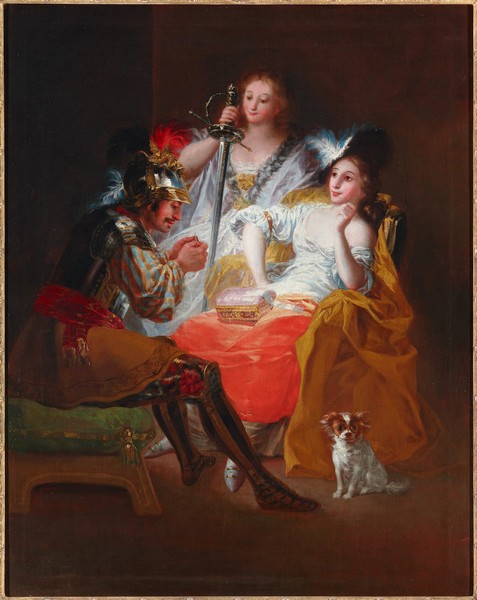 We do not know the original provenance of this work. It seems that we are before a humorous mythological scene, if the traditional identification of the subject of the painting is correct. It perhaps responds to the tastes of a client, or Goya himself, as indicated by the prominence of the signature, which suggests to a close relationship between artist and client.

We can see the hero Hercules, who was made a slave by the decision of the Oracle at Delphi and bought by the Queen of Lydia, Omphale. The story goes that she sheltered Hercules in her palace, and that there the hero acquired the habits of a lady, hence his depiction in this painting carrying out some sewing while a young lady watches him, amused. Behind them we can see Omphale, who is sat holding a sword. The humour expressed in the pose of feminine delicacy adopted by the hero is added to by the fact that while he is clothed from head to foot in a manly suit of 16th-century armour he is trying to thread a needle. The three figures, seated in a circle, are lit in an unrealistic way: there is no visible source of light in the composition, although the light seems to emanate from the centre of the group.

The work is painted on a reddish ground which shows through in various places on the canvas, contributing to the vividness of the colour palette, which is very intense. The faces of the women are reminiscent of the Immaculate Conception preserved as a sketch in the Prado Museum and the artist's portraits of María Teresa de Vallabriga, the wife of the Infant Louis de Bourbon.

It was in that same year, 1784, that Goya produced the magnificent group portrait The Family of the Infante Don Luis. Juliet Wilson thinks it possible that the hidden meaning of this supposedly mythological work refers to the morganatic marriage of the infant and his bride from Zaragoza, and her purported extra-marital affairs. This is a very sensual scene in which Omphale admires her slave lover alongside her very lightly dressed companion.

The work was cleaned in 1983. The frame is not original.