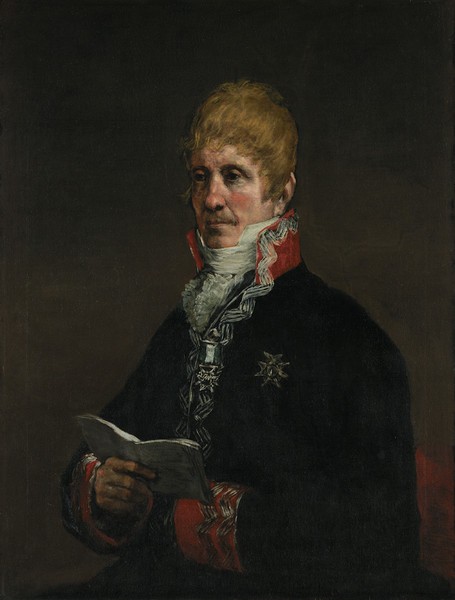 Around 1925, this work was in a private collection. Shortly after, in 1930, it was acquired by Harold Woodbury Parsons for the institution which houses it today.

Ignacio Omulryan y Rourera (1752-Ca. 1826) was descended from a noble Irish family on his father's side and from an important Barcelona family on his mother's side. He was a soldier, cavalry lieutenant, the head of the postal service and, in 1810, he was named minister of the Council of Spain and the Indies and Vice-President of the Royal Company of the Philippines. In fact, he was the person who proposed that Goya commemorate the famous meeting of the company of 30 March 1815 with a large painting.

This portrait is very close to that of the same model within the group portrait, where he appears to the right of the king. The pose and appearance are very similar: the figure is seated, seen half length, and in half profile. He even appears to be wearing the same clothes, the black dress coat with red collar and white shirt. Here we can also see the elegant details of the silver-threaded needlework. Over the clothes hang the medals that he was awarded, the Grand Cross of Isabella the Catholic and that of the Order of Charles III. Omulryan was by this time advanced in years, a fact that shows through in his face, with its dark, deep-set eyes. His expression is serious and thoughtful, his lowered gaze lost in the distance, giving him a certain air of disillusionment. His left hand is concealed inside his dress coat, in a gesture that was very common in these portraits, whilst his right hand holds some folded papers. The thin figure seems somehow more elongated than is normal, yielding more presence to the neutral grey background.