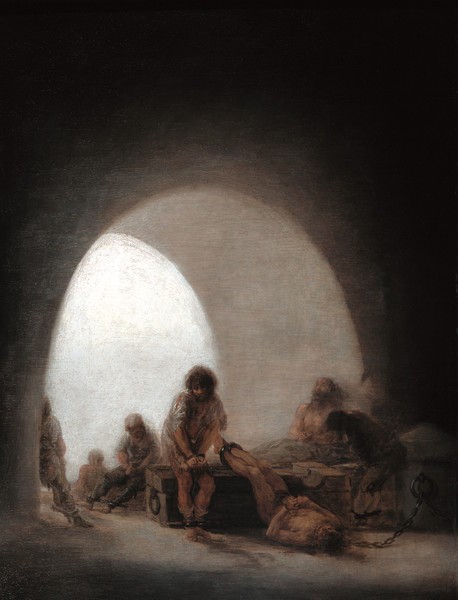 This work came from the collection of the Count of Quinto, Madrid. It was acquired by J. Bowes in 1862.

This work may have belonged to the set of paintings that Goya made during his stay in Cádiz at the home of Sebastián Martínez and which he presented at the Royal Academy of Fine Arts of San Fernando in Madrid in January 1794 (see rec. no.).

The scene takes place inside a prison cell, in which we can see light pouring in through an archway, a visual device that brings to mind that used in the work Children Playing at Bullfighting.

Inside this room, Goya has painted a number of prisoners, lying down, sitting on the ground and leaning against the walls, fettered with handcuffs and shackles, and all of them dressed in rags, if at all. These are miserable, dejected men, themselves as surely imprisoned by fear and desperation as their arms and legs are by the chains and manacles. Goya emphasized the importance of these elements by placing at the centre of the composition the shackles which bind the feet of the prisoner lying on the ground, well lit by the light coming in through the archway.

We do not know whether the artist had the opportunity to visit a real prison or whether he was told of the state of these places by others, but we do know that he took a keen interest in the situation that prisoners found themselves in. It is quite likely that he would have read the text by Cesare Beccaria (Milan, 1738-Milan, 1794) entitled On Crimes and Punishments (Dei delitti e delle pene) (1764). In this treatise, the Italian author called for the abolition of the death penalty and proposed measures to humanize the punishments employed in prisons. He stated the need for policies which aimed to prevent crimes rather than ones which focussed chiefly on dishing out punishments, in most cases disproportionate ones at that, for them.

Goya's interest in the work of Beccaria would also be seen in some of the etchings in his Disasters of War series, in which he portrays a number of brutal executions (for example, no. 14, The way is hard! (Duro es el paso!), and no. 15, And it can't be helped (Y no hai remedio)).