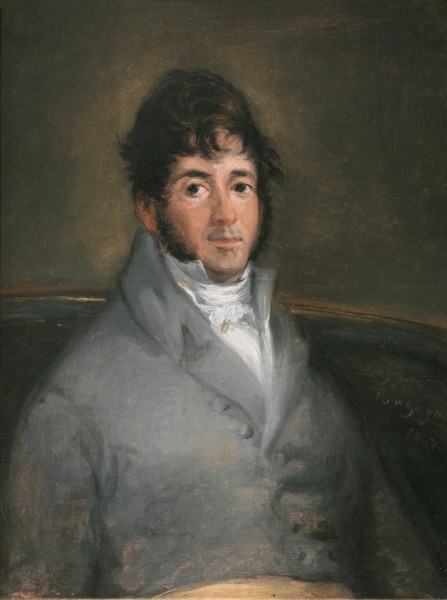 The exact circumstances in which this portrait was commissioned are not known, but we do know that in 1808, the year after it was painted, it was exhibited at the Royal Academy of San Fernando. In 1872 the Spanish Ministry of the Interior sent it to the National Painting Museum of La Trinidad, from where it subsequently entered the collection of the Prado Museum.

Isidoro Máiquez (Cartagena, 1768-Granada, 1820) was considered to be one of the greatest stage actors of all time, as well as being a writer and director. He studied in Paris thanks to the help of the Duke and Duchess of Osuna, of whom he was protégé. One of his greatest performances was in bringing Shakespeare's Othello to life in 1802. Following the Spanish War of Independence, and owing to his liberal ideals, he was banished from the court to Granada, where he died.

Here the sitter is shown seated in a large armchair, wearing a grey buttoned jacket and bright white shirt. The most striking feature in this painting is the subject's face, which is brightly lit and is looking calmly out at the viewer with a melancholy air, displaying a pair of thick dark sideburns, in keeping with the fashion of the period.

According to Margarita Moreno de las Heras, this simple portrait follows a model that is very similar to that used by the painter to depict his intellectual friends such as Moratín.

Another version of this same portrait (Isidro Máiquez), also considered autograph, is in the collection of the Art Institute de Chicago