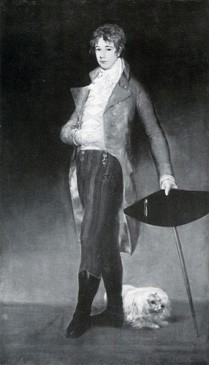 This work belonged to the collection of Mariano Goya, and later to that of the Marchioness of Salamanca, in Madrid; the Bischoffsheim collection; that of Mme Francis de Croisset; and that of the Countess of Noailles, Paris, before arriving at its current location.

Javier Goya was the son of the painter from Fuendetodos and his wife, Josefa Bayeu. Goya also painted Javier's portrait on one of the decorate medallions that form part of the series Goya made for the wedding of his son and Gumersinda, in which the entire Goicoechea family appear.

The slender figure of the sitter is shown in front of a neutral background. He is dressed in the English style, with dark trousers, an open frock coat, and, underneath, a high-collared, white lace shirt, which lends a certain luminosity to the work as a whole, which is a symphony of greys and whites.

In his left hand he holds a walking stick and a black hat, whilst his right hand is concealed inside his shirt. His serious-looking face is surrounding by a thick head of hair. The white dog at his feet is almost certainly the same one that appears in the portrait of his wife, Gumersinda Goicoechea, with the two works forming a pair.

Both portraits were probably made to celebrate their wedding.