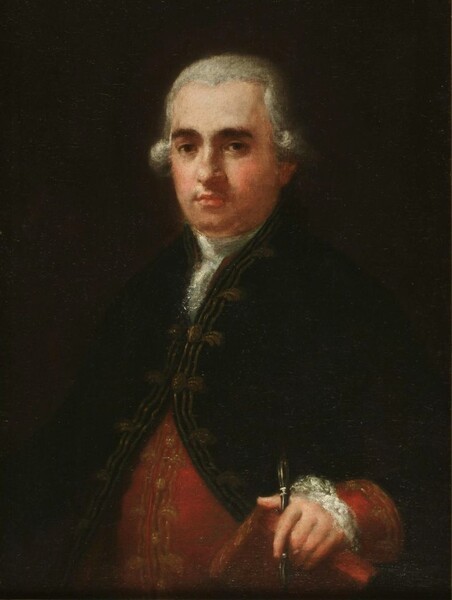 This portrait was made to thanks the Bank of San Carlos pictures entrusted and in commemoration of the institution offical appoinment in 1783.

Juan Agustín Cean Bermúdez (Gijón, 1749 - Madrid, 1829) was a painter, historian and art critic. He also had a career in government as First Official of the Secretariat at the Banco Nacional de San Carlos (Spain's national central bank). He was a friend of Gaspar Melchor de Jovellanos, and worked for a time at the General Archives of the Indies in Seville. He travelled throughout Spain, and was the author of the Diccionario histórico de los más ilustres profesores de Bellas Artes en España (Historical Dictionary of the Most Illustrious Professors of Arts in Spain), published in 1800 by the San Fernando Royal Academy of Fine Arts. In 1814 he published a biography of Jovellanos, a work fundamental to a knowledge of this figure. Goya went on to produce other portraits of his friend and advisor: an oil painting and drawing. The present work may have been painted when Bermúdez was named First Official of the Banco Nacional de San Carlos.

He is depicted standing against a dark background dressed in a dark frock coat and waistcoat and carrying a pencil in his left hand.

It is a simple portrait, without the solemnity which marks other portrayals by Goya of prominent figures of the age: in this case, the sitter is characterized by his kind, affable expression.