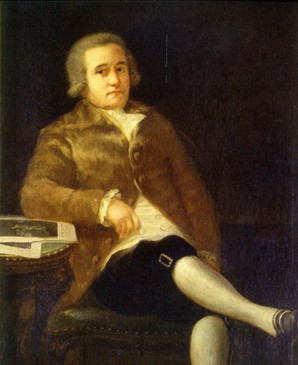 This portrait of Juan Agustín Ceán Bermúdez was painted by Goya for the subject. It is possible that it was produced during the artist's second stay in Andalusia between 1796 and 1797. It belonged to the Marquises of Corvera and subsequently the Marquises of Perinat y Campo Real (Madrid). The work remains in the possession of their descendents today.

Juan Agustín Ceán Bermúdez was a painter, historian and art critic. He also had a career in government as First Official of the Secretariat at the Banco Nacional de San Carlos (Spain's national central bank). He was a friend of Gaspar Melchor de Jovellanos, and worked for a time at the General Archives of the Indies in Seville.

He travelled throughout Spain, and was the author of the Diccionario histórico de los más ilustres profesores de Bellas Artes en España (Historical Dictionary of the Most Illustrious Professors of Arts in Spain), published in 1800 by the San Fernando Royal Academy of Fine Arts. In 1814 he published a biography of Jovellanos, a work fundamental to our knowledge of this figure.

He was also a friend and advisor to Goya, who painted him on several occasions. Here we see him seated in a relaxed pose, resting his right arm on a table which has some papers on it. He is wearing a brown jacket, white shirt, breeches with buckles and white stockings. This portrait is notable for its dark tones, with the brightest highlights being provided by the sitter's stockings and shirt. As in the case of the majority of Goya's portraits, the dark background serves to make the figure stand out.