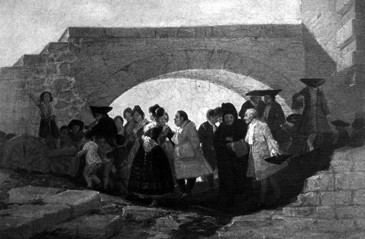 Sketch for the tapestry cartoon The Wedding.

This sketch belonged to the Jockey Club of Buenos Aires and was destroyed in the fire that took place on its property in 1953.

Three different sketches for The Wedding have been proposed by various scholars, some of which are considered to be reductions made after the cartoon. In a letter Goya wrote to Bayeu in 1791, reference is made to a "sketch of the largest painting for the King's room, in the Royal Palace of San Lorenzo", but we do not know which of the three the artist was referring to.

The work discussed here appears to be an authentic preparatory sketch, and it has been studied by several writers, including Sambricio, Desparmet Fitz-Gerald, Gassier, Wilson and Salas.

Because of its title, this painting has sometimes been confused with another attributed to Goya in the Museum of Buenos Aires, entitled Festivities underneath a Bridge (Fiesta popular bajo un puente), although Arnaiz assures us that this work is actually by Eugenio Lucas. This same writer believes that the sketch destroyed in Buenos Aires was an autograph work by Goya, although he was only able to see it in some good photographic reproductions.

There are hardly any differences between this sketch and the finished tapestry cartoon.