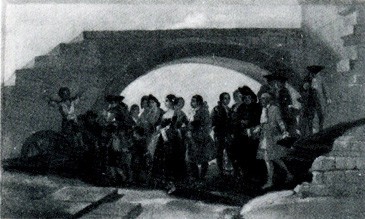 Sketch for the tapestry cartoon The Wedding.

From a private collection in Zurich, Switzerland. It was in said collection when it appeared in Gudiol's publication.

Three possible sketches for this cartoon have been mentioned. In a letter Goya wrote to Bayeu in 1791, reference is made to a "sketch of the largest painting for the King's room, in the Royal Palace of San Lorenzo", but we do not know which of the three the artist was referring to.

The one we are concerned with was published by Gudiol, who believes it is the only real sketch made for The Wedding. Morales proposes that this could be a reduced-size version of the finished work, given its similarity to the cartoon, something which is also suspected by Gassier and Wilson. There did exist another possible sketch - with less doubt as to Goya's authorship - in the Jockey Club of Buenos Aires, but this was destroyed in a fire. A third, which varies significantly from the cartoon, is in the collection of the Marquis of Bermejillo, in Madrid.