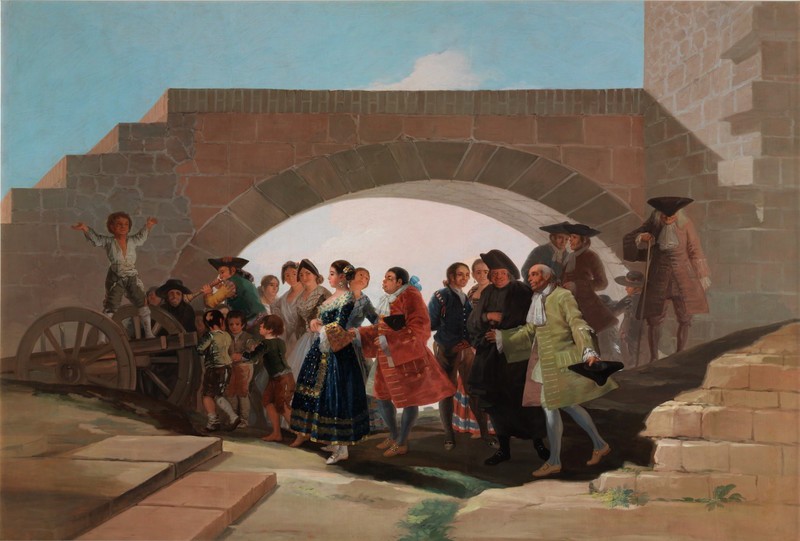 This work was meant to serve as the model for one of the tapestries that were to adorn the office of Charles IV in the palace of San Lorenzo de El Escorial. This was the last series of tapestry cartoons that Goya made and it was not exempt from conflicts. He was commissioned to produce works to adorn the office in April 1790 but Goya refused the job, believing that this kind of painting was too restrictive. His refusal lasted just over a year, when the advice of those around him and the real threat of having his salary as court painter cut off forced him to yield and carry out the series of works "of rustic and comic things", just as the king had requested. Thus, in June 1791 the artist was already working on the sketches and began the cartoons the following summer, as we can deduce from the account left by the carpenter Cittadini, dated June 1792.

According to this bill, there were originally going to be twelve tapestry cartoons. However, only four main tapestries and three overdoor pieces were finally made. It appears that the trip the artist made to Andalucía in 1793 and the illness that led to him becoming deaf interrupted the work.

Around 1856 or 1857, this cartoon was moved from the Royal Tapestry Factory to the Royal Palace in Madrid. There it remained in the tapestry basements until it was taken to the Prado Museum, into which collection it entered under orders given on 18 January and 9 February 1870.

The scene takes place in a rural setting (a new development in Goya's cartoons, which until this series had always been set in the city or in the countryside immediately surrounding it) and depicts the celebration of a country wedding that has just taken place, complete with numerous figures in attendance. In this large painting Goya introduced compositional elements not featured in any of the previous cartoons. No longer do we see the switching between fore- and background, and the pyramid structures have gone, too. Here, the figures are crowded together in tightly-knit planes, giving a closed-in effect, and framed by the arch formed by the bridge. The light that enters through this arch brings out the different colours of their finery. In the centre we see the newlyweds: she is the centre of attention for the other young girls, whilst he, standing out even more than his new bride thanks to the vivid red of his dress coat and the way his figure is silhouetted dramatically against the sky, divides the nuptial scene in two. On the right stands another important figure, most probably the father of the bride, clad in a green dress coat.

Going by the expressions of the characters it is clear that what we are looking at is the representation of a marriage of convenience. The bride, a beautiful young girl dressed in an elegant frock, appears only partially present, graciously allowing herself - from her new economic and social position - to be contemplated by the other girls of the village, the looks on their faces clearly betraying the farce that is taking place. The newly betrothed will now be able to enjoy certain amorous pursuits that were forbidden whilst she was still single. The groom, a rich but ugly man, with coarse, bloated features, and in whom the desire for his lovely new wife is evident, is wearing ridiculous old-fashioned attire, making him the centre of the parody. The father of the bride gives his new son-in-law an affectionate look, and in his face we can see the happiness of a man who has just made a good business deal.

This was a very popular theme in literary and theatrical satire, too, as well as being the subject of debate amongst intellectuals and legislators. The playwright and close friend of Goya, Leandro Fernández de Moratín, dedicated no less than three of his plays to this subject. Goya would himself return to the topic with much more vehemence in some of the prints from the Caprices series.

It is also possible to add a further interpretation to The Wedding, relating it to the ages of man and to the symbolism of vanitas. The fact that the figures are arranged according to their ages (children on the left and the elderly on the right) and the presence of steps both in the foreground and leading up to the bridge behind them may be making reference to the stairway of life, with marriage as a milestone along it.

We can see therefore that the artist had already begun to include certain moral themes in his works, and his anxiousness to express such thoughts was becoming more evident.