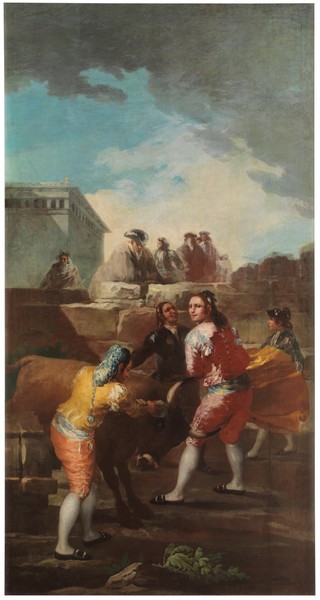 This cartoon was delivered to the Royal Tapestry Factory on 24 January 1780, along with ten other cartoons, completing the decoration of the antechamber to the bedroom. These eleven tapestry cartoons - almost certain to have been made between 21 July 1779, when the artist delivered A Stickball Game and The Swing, and this delivery in January 1780 - were executed very rapidly. It is very likely that Goya was aware of the planned suspension of manufacturing work at the factory and was anxious to finish his commissions and receive his wages.

The Young Bull shared the south wall of the room with The Tobacco Guards.

The subject of bulls and bullfighting was one that Goya, himself a keen aficionado, went back to time and again, and this was his first work along these lines. It is true that the result is not one of his best pieces; the young bull appears heavy and static whilst the toreros show little skill. The one on the right, dressed in red, could be a self-portrait of Goya fighting the animal, but this is not a commonly accepted theory since some writers maintain that Goya would not have depicted himself as a common majo. When he did paint himself into one of his works, five years later, it was as a court servant in the works The Sermon of Saint Bernardine of Siena and The Count of Floridablanca. His great fondness for bullfighting, however, may have led him to depict himself as a torero.

The theme was a polemic one, since Charles III did not like the bullfights, even though the Prince and Princess of Asturias did. This may explain why Goya did not choose a bullfight proper but rather something more in keeping with a fair, where it is the braver young men of the town or city rather than professional toreros confronting the bulls.

The background features a building that, as Camón points out, recalls Aragonese architecture, particularly in the way the tall windows are arranged. The same writer says that the best thing about this cartoon is the colouring employed on the suits of the young men - silky and iridescent, with deftly painted highlights.

Tomlinson believes that The Young Bull represents virility, in contrast to the lasciviousness and feminine sensuality embodied by the women in The Swing and The Washerwomen on the opposite wall.