Prayer in the olive grove 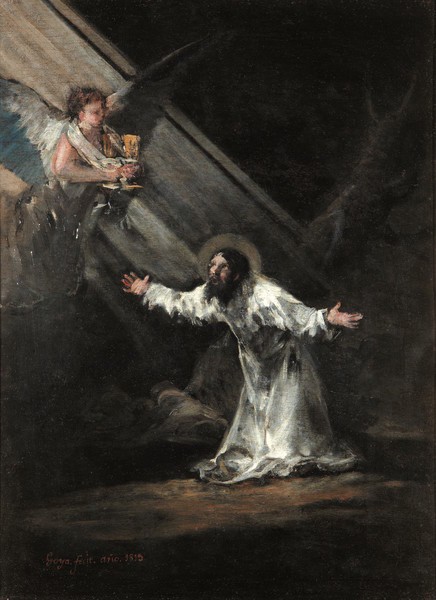 According to traditional accounts this work was a gift from Goya to the Scolopi fathers of the School of San Antón in Madrid following the commission Last Communion of Saint Joseph of Calasanz. It is a sketch for a definitive painting which has been lost.

Goya has depicted Christ against a black background - as was his custom in later religious works. The Messiah is kneeling, dressed in a long white tunic, with his arms open in the form of a cross. His gaze is directed towards an angel that flies above him, holding the chalice and paten and bathed in a powerful ray of light. Jesus, awestruck, puts his fate in the hands of the Father, whose only response is the representation of these liturgical objects which presage the Passion.

There is a second version of this sketch in existence recorded by Mayer (1925, p. 169, cat. 20) which has been judged to be an authentic work, but is most likely a copy. This work belonged to the collection of the Marquis of Zugasti in Madrid, and was displayed in the exhibition Goya held in Bordeaux in 1951. Following its sale at Sotheby's in London in 1969, it appeared on the North American market.