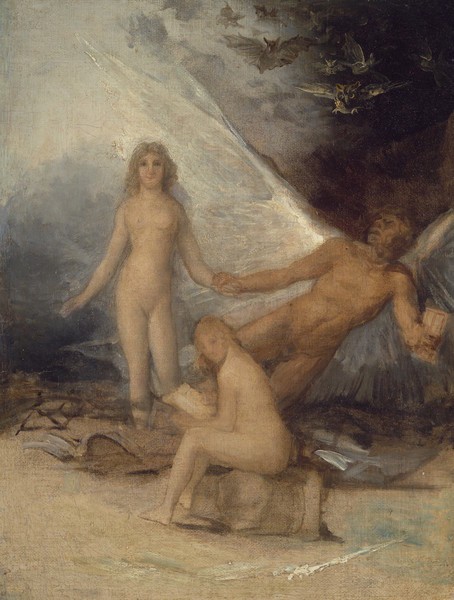 This is a sketched study of a theme which in time would reach full development in another of Goya's large format paintings, Truth, Time and History. Goya gave this painting to Juan Carnicero from Madrid. Some time around 1875 it passed into the possession of Alejandro de Coupigny in Madrid. In 1918, Ralph W. Curtis bought it for Horatio Greenough Curtis for his Boston collection. It was inherited by his wife, and on 21 July 1927 she donated it to the Museum of Fine Arts in Boston.

The painting is dominated by ochre tones and a sketchy execution, and presents many variations in comparison to the large format work. Likewise, we can identify many alterations, which lead us to the conclusion that Goya's ideas were not particularly clear at the time when this piece was painted. While the essential elements of the composition are maintained in the final version, some changes are so significant that they have even caused confusion when it comes to identifying the subject. The most likely scenario is that Goya reworked this composition when he was painting Truth, Time and History, introducing the changes which he thought appropriate.

We are presented with three figures. The allegory of Time, winged and carrying an hourglass, has the face of a peaceful beast who looks up, frightened, at the menacing beings which fly above his head. We can identify various changes in this area; in fact, in the large format version Chronos has the head of a bearded man, and the fearsome bats and owls have disappeared altogether. From the position of his legs, it seems that he is floating at the level of the floor, while he saves a girl who he is holding by the hand from danger. This girl has been identified as Truth, since she is naked. Her face has been repainted several times during restoration work, and perhaps Goya's work has been excessively modified. In the definitive work, in her place we find a woman dressed in white with a sceptre and a small book in her hands. The visible brushstrokes around her body reveal the presence of a tunic or other kind of garment - another alteration made to this sketch. The third figure in this work is identified as an allegory of History. She is sitting with her back to the viewer on a piece of column, holding a large book. She is turning her head towards the viewer. This figure is also naked, and in the definitive work is barely covered from the waist down with a green cloth.

Time brings Truth forward out of the darkness, while History bears witness to the events. But the notable changes in the final canvas, which have led to various interpretations, make Juliet Wilson ask what Goya truly wished to represent in this sketch, and even consider that this is not in fact a sketch for the final piece, but an independent work whose final version was never painted, or a sketch on the theme of witches, given the similarities between this work and The Spell. From a stylistic and thematic point of views, it is also very close to the Caprices series. In particular, it can be associated with a drawing on the same theme, as it presents numerous similarities with the preparatory sketches for that series of prints.

Technically, the light effects which Goya wanted to express in this mysterious sketch have been lost, likewise the impasto brushwork, irreparably damaged during an overly aggressive restoration job.

The work has been relined. Until that time it must not have been framed, as can be seen from an archive photograph of the restoration work stored in the Boston Museum of Fine Arts.