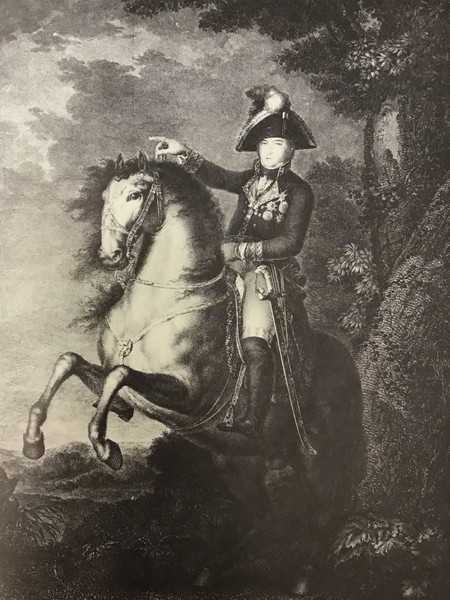 This work may correspond to one of the paintings that appears in the inventory of 1812, carried out following the death of Josefa Bayeu at Goya's house in Calle Valverde, Madrid. Inherited by Javier Goya, it was later in the collection of the Marquis of Guirior (Málaga). It then belonged to Arnold Seligman (Paris & New York), and in 1937 entered the Wildenstein collection (New York). In 1967 it was acquired by the Meadows Museum in Dallas (United States). It was sold at auction at Sotheby's in London in 2009.

Although there exist no documents regarding the commissioning of this work, Goya alludes to it in a letter written to his friend Martín Zapater in 1795: "You had better come to help me paint the [Duchess] of Alba, who barged into the studio to have her face painted by me, and she got her way; I certainly prefer this to painting on canvas, and I will also have to paint her full-length, which I will do as soon as I have finished a sketch that I am making of the Duke of La Alcudia on horseback...". In the painting, probably a study or sketch, Godoy is shown, in the mould of Velázquez, mounted on a horse which is in the levade position, lifting its forelegs off the ground, in sharp profile and with a serious and determined look upon his face. The royal favourite is wearing the uniform of Captain General of the Royal Guard, a rank he achieved in May 1793, and is showing off the sash of the Order of Charles III, which he was awarded in 1791.

There exists a painting of similar dimensions entitled A Picador and dated Ca. 1791-1792, x-rays of which have revealed that underneath the visible painting there is another equestrian portrait of Manuel Godoy. The overpainting, made around 1808, would coincide with Godoy's fall from grace.