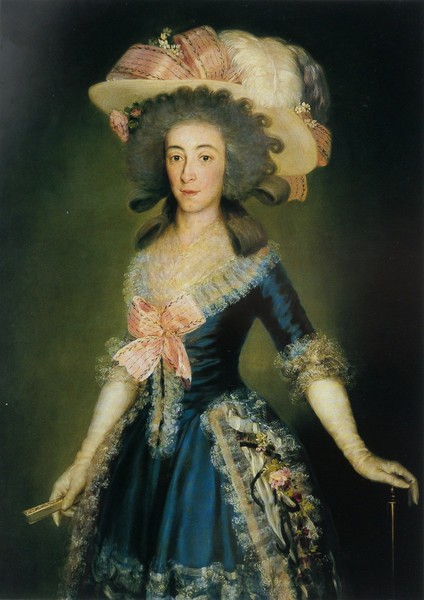 This work was commissioned to Goya along with its companion painting Pedro Téllez Girón, IX duque de Osuna in 1785. It has belonged to Alfredo Bauer, Juan March Ordinas and Bartolomé March Servera.

Doña María Josefa de la Soledad (Madrid, 1752 - 1834), as well as being the Countess-Duchess of Benavente, was the Duchess of Béjar, Mandas, Plasencia, Arcos and Gandía, Princess of Anglona and Esquilace, Marchioness of Lombay and Jabalquinto, and the Countess of Mayorga.

She was one of the most prominent female figures of the Spanish nobility, and dedicated her life to the patronage of the arts, an interest she had developed since her childhood in the cultural atmosphere in which she was raised. She was even admitted into the Economic Society of Madrid, and led the Junta de Damas, a women's council providing various services to benefit women.

She married the 9th Duke of Osuna, Pedro Téllez Girón. The family home was a frequent meeting place for intellectuals and artists, visited by such figures as Moratín, Tomás Iriarte, Ramón de la Cruz and, of course, Goya.

Doña María Josefa became one of Goya's main patrons, commissioning him to paint various canvasses including a portrait of her family, the present work, and the portrait of her husband, the Duke of Osuna.

In this painting the Duchess is dressed in the French style of which she was a great devotee. She wears a blue outfit decorated with lace and a pink bow at the bust. Her headdress, adorned with bows and feathers, is inspired by those worn by Marie Antoinette. In her right hand she holds a fan. The face of this woman is striking, transmitting intelligence and self-confidence with a lively gaze.