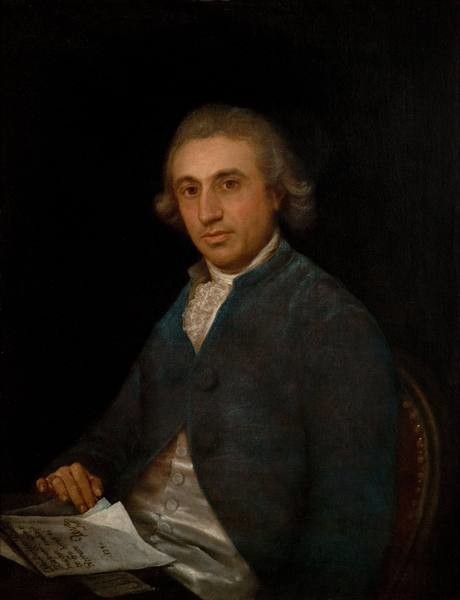 Mi amigo Martín Zapater. Con el/mayor trabajo/te a hecho el/Retrato,/Goya,/1790 ("[To] my friend Martín Zapater. With the greatest care and effort I have made you this portrait, Goya, 1790", in the letter on the table).

This portrait, begun during Goya's stay in Zaragoza in October 1790 and finished in December of that same year, was bequeathed by Martín Zapater to his great-nephew, Francisco Zapater y Gómez (Zaragoza), later coming to form part of the following collections: Durand-Ruel in Paris, Widener in Elkins Park, Philadelphia, Thyssen in Lugano and Schloss Rohncz. For a time it remained in storage in the Cramer Gallery, in The Hague, subsequently entering a private collection in London and finally arriving at its current home.

Martín Zapater y Clavería (Zaragoza, 1747-1803). Farmer, banker and merchant. Ombudsman of Zaragoza City Council. An ennobled member of the bourgeoisie (1789) and an ilustrado, Zapater was also a founding member of the Aragonese Royal Economic Society of Friends of the Country (1776) and an academician of the Royal Academy of Fine Arts of San Luis, Zaragoza (1793).

He was one of Goya's closest friends, as the correspondence between the two men demonstrates. These letters provide a fundamental source of knowledge regarding the life and personality of the artist, who painted Zapater on two occasions (Martín Zapater).

In this first portrait, with its simple composition and economy of means, the sitter is presented in front of a dark, neutral background, half length, seated in a chair with a curved back before a writing desk strewn with papers, one of which contains the painting's inscription. He is wearing a blue dress coat, buttoned up and partially covering a greenish-grey silk waistcoat and a neck tie with frills. In his face, his eyes with their intense, penetrating gaze stand out, as does the prominent nose and the smile flitting around the corners of his mouth. His somewhat gaunt appearance reveals a trace of the illness that Zapater had suffered that same year, and which had obliged him to stay up until August at the sanctuary of Misericordia, near Borja (Zaragoza).

This portrait may have been a gift from Goya to Zapater to commemorate the noble honours awarded to him the previous year.