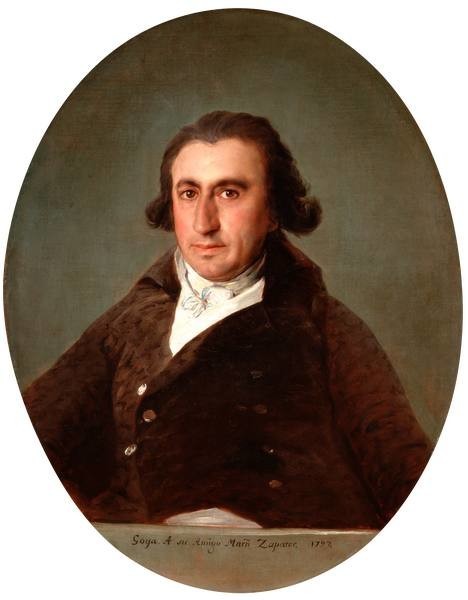 This work was bequeathed by Martín Zapater to his grand-nephew, Francisco Zapater y Gómez. At the beginning of the 20th century it belonged to the Durant-Ruel collection, in Paris, and was acquired for the collection of Ramón Sota y Aburto, Bilbao, from where it was donated to the current owner in 1980.

This slightly longer than bust portrait depicts the sitter in half profile, before a greenish grey neutral background. He is wearing a dark-brown, double-breasted velvet dress coat with wide lapels, beneath which we can see a white shirt and a neck tie. His face is that of a mature man, in good health and of friendly disposition. Some of his features are very marked, such as the rounded chin, prominent nose, deep-set eyes, thick eyebrows and broad forehead.

This is a simple, intimate portrait, in which Goya represents his best friend with boldness and complete freedom, recalling pre-Romantic models common to English painting, which the artist would have been familiar with.

Although some writers (e.g. Desparmet Fitz-Gerald) have speculated about the possibility that the canvas was originally rectangular, it is more likely that it was oval shaped from the outset.