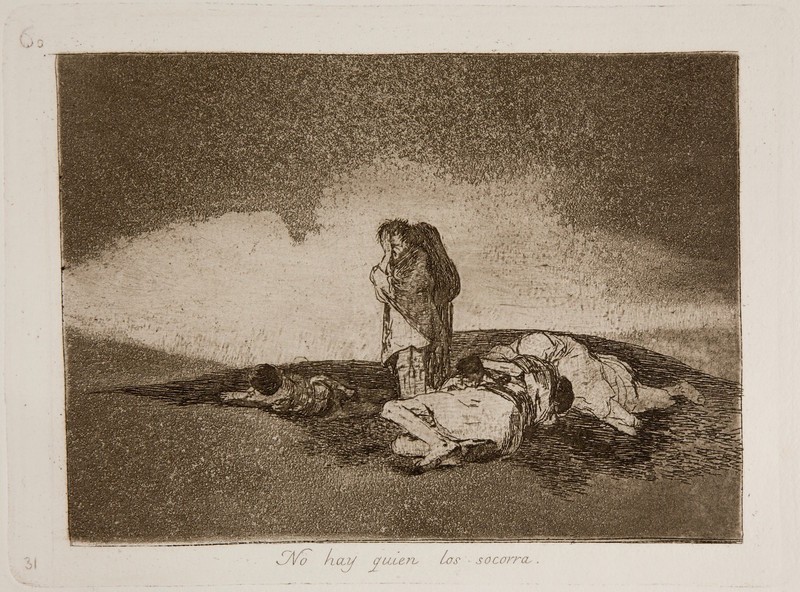 In the middle of a waste ground a man stands with his hand over his face in a gesture of desperation. He is surrounded by the corpses of victims of the famine that devastated Spain during the Spanish War of Independence.

Goya renders a very dark, granular sky in the upper part of the composition in aquatint, while the central part of the plate has been left clear. The use of this device gives the effect of an omen of death looming over the central standing figure and highlights his presence in the print. The corpses are rendered in aquatint: two of them are wearing white clothing that captures the attention of the viewer. The painter depicts the ragged, oversized clothing and emaciated, bony limbs of the wasted figure who covers his face in great detail.

There is no one to help them can be linked to print no. 18, Bury them and keep quiet (Enterrar y callar) of this series, in which Goya represents a survivor of the famine surrounded by corpses in a desolate landscape. In the case of both prints the only living figure seems aware that he also is condemned to die.

The print also alludes to the government's inability to deal with the famine that decimated the population. On 19 November 1811 Joseph Bonaparte (Corte, 1768 - Florence, 1844) issued a decree establishing the "Establecimiento de Beneficencia", which was subsequently replaced on 7 September 1812 by the "Junta de Caridad", both of which were charitable institutions whose purpose was to supply low-cost food to the citizens of Madrid. To this end, the Establecimiento de Beneficencia was provided with 50,000 reales to cover its costs. However, some months later the local authorities in Madrid sent a report to describing the King detailing the institution's precarious situation. The hospitals and sanatoriums provided shelter for more than 8,000 people, and the resources available to them were insufficient to the task of preventing starvation in the population.

The plate is stored in the National Chalcography (cat. 311).