They do not want to (No quieren) 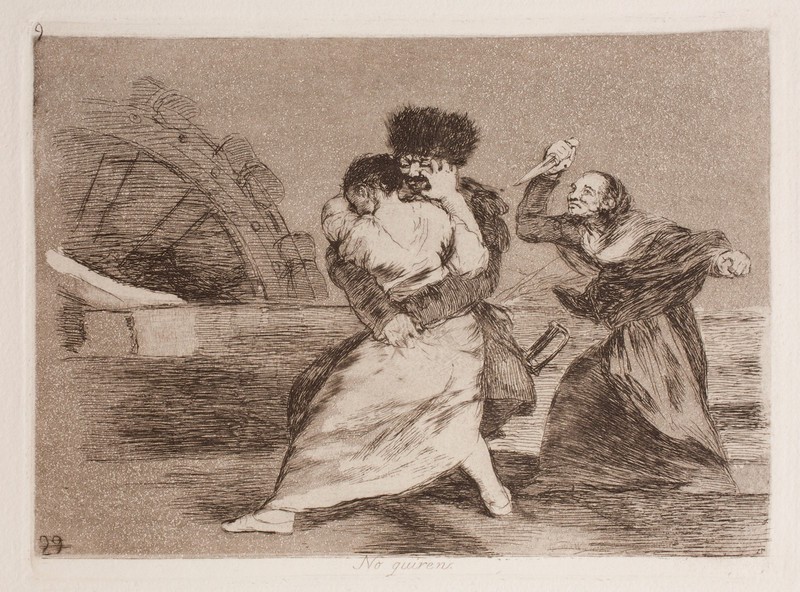 There exists a state proof of this etching, without the number but with the aquatint extending up to the edges of the copperplate. In the third state proof the number 29 appears engraved on to the plate and there is some retouching done, in burin, on the soldier's hat. In this same proof the aquatint has been removed from around the edges.

In the final state proof we see an engraved number 9 and much more work done in drypoint and burin.

They do not want to depicts a woman being violently assaulted. A French soldier has hold of a woman around the waist. She has her back to the viewer, standing with her legs wide apart and with her face hidden behind one of her arms. She is attempting to defend herself by ferociously scratching at her attacker's face. On his face we can see a grimace of pain. Behind the pair, an old woman is about to drive a dagger into the French soldier. This image includes a spatial reference, a waterwheel, situating the scene in the countryside, and possibly indicating that what we are witnessing is an isolated episode, perhaps not directly related to the war. In addition, this is one of the few times that Goya has chosen to represent the face of the enemy, possibly with an eye to showing the pain being inflicted on him by the woman.

The dark background, created using aquatint, suggests that this scene could have taken place at night. The Aragonese artist has emphasized the importance of the woman who is being attacked by clothing her in a white dress. This is most likely an allusion to her innocence, as is the white shirt worn by the central figure in Third of May 1808.

Eleanor Sayre also draws a comparison between this print and some others which also feature large figures and make use of the technique of aquatint, such as no. 10, Not in this case either, no. 33, What more can one do? and no. 38,Barbarians!, and puts their date of execution at some point after 1810.

The gesture of the woman who is ferociously scratching at the French soldier's face recalls a print by Fernando Brambila (1763-1834) and Juan Gálvez (1774-1847) which portrays Joséf de la Hera, a carpenter armed with a knife, attacking a French soldier (1812-1813, City Hall, Madrid). The expression of pain on the face of the soldier, who has sideburns and a beard just like in Goya's image, and the way the carpenter's hand is shown right up close to the other man's face both coincide with the episode depicted by the Spanish artist.

It is also worth mentioning another scene which resembles this one quite closely. Portraying a young woman who is being abducted, undoubtedly to be subsequently raped, it was made in around 1811 by an anonymous artist (National Chalcography Museum, Antonio Correa collection, Madrid) to commemorate the sacking of Tarragona, an event which took place on 28 June that same year.

The etching plate is conserved in the National Chalcography Museum (cat. 260)