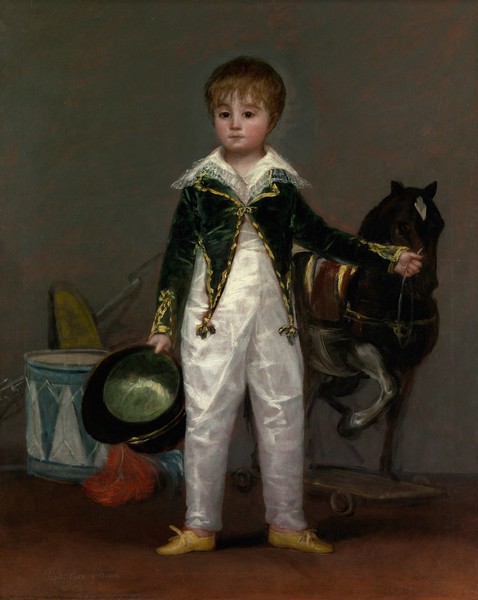 Little is known about Pepito Costa except that he enlisted in the Local Voluntary Infantry in Madrid.

Here Goya has painted him as a child, when he was around five years old.

The boy is shown standing in front of a neutral background, where it is still possible to see the reddish primer that the painter typically applied to his canvases. He is wearing white dungarees underneath a green jacket with gold edging and decoration, in imitation of the uniforms worn by soldiers at the time. On his feet he wears yellow shoes with knots. In his left hand he holds a string that is tied to a toy horse, whilst in his right hand he grips a large military hat, with red and blue feathers. Behind him, a drum and other assorted toys complete the scene.

The boy's face looks straight out at the viewer with a serious and slightly nervous expression - perhaps in a premonition of what was about to occur, since the portrait was painted just before the start of the invasion by Napolean's forces.

The light is falling directly on to the figure of the child, leaving the background in shadow where, although painted in long brushstrokes, the details of the toys are all recognisable, if somewhat blurred.

According to Juan J. Luna, all of the objects in the composition - with the exception of the toy horse - are depicted life size, minimizing the role of the child and in a way reducing his importance as the subject of the work.