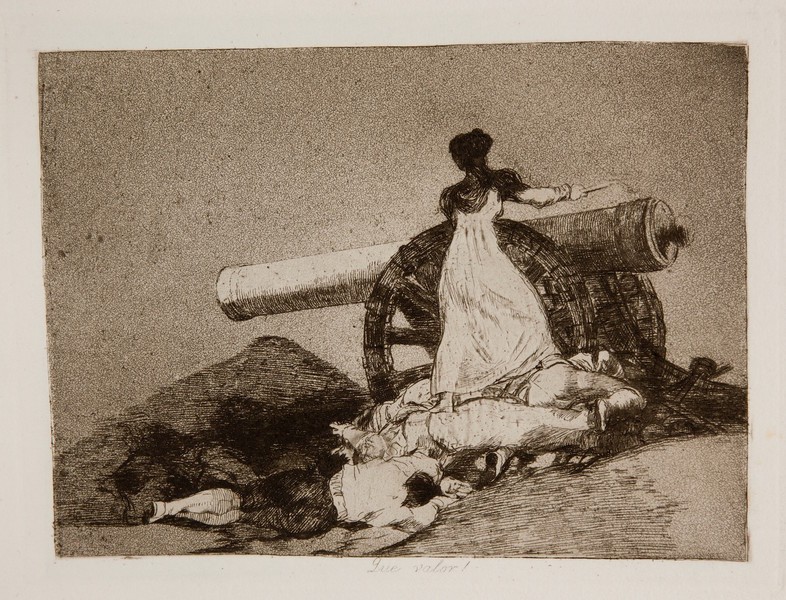 There exist no known state proofs made prior to the addition of the numbers. One of these proofs bears the number 41 and shows some retouching in drypoint and burnisher on the woman's dress. Another state proof is engraved with the number 7, the last in the series, and shows some touches of drypoint on the woman's dress and more extensive work in burin on the outline of her head and shoulders, on the cannon and in the shadow below the wheel.

Two preparatory drawings for this print are conserved in the Prado Museum.

In What courage! we see a woman, her back to the viewer, preparing to fire a cannon. At her feet lie several bodies, which the woman has clambered on top of, thus forming a triangular composition.

Goya has used aquatint in the background, achieving a peculiar luminosity by gradually darkening the sky the further it gets from the cannon. In the distance we see a mountain, rendered by the etching of very tightly-packed horizontal lines. This shape echoes the triangle made by the woman atop the pile of dead bodies. Her clothes, along with those of some of the corpses, are white and provide an important area of brightness, drawing the viewer's eye to her.

The protagonist of this scene has been identified by Piot and Mélida as Agustina de Aragón (Barcelona, 1786-Ceuta, 1857), who was present at the first siege of Zaragoza, where she became famous for her contribution to defending the city against the French attack on 1 July 1808. It has also been suggested that this could be a representation of Manuela Sancho y Bonafonte (Plenas, 1783-Zaragoza, 1863), who also fought to defend Zaragoza. Alternatively, this image could be a reference to all those women who played an active role in the war and who bravely defended their country, which would explain why Goya has portrayed the figure with her back to us and with her face hidden from view.

What courage! is, at first glance at least, one of the most serene prints in the series, featuring as it does no violent acts or graphic representations of suffering. But when we look more closely at this superficially peaceful scene, we see that this print depicts a moment of intense drama. We are reminded that this is an image of war when we notice that the woman in the picture is standing atop a pile of bodies, the result of a bloody struggle.

An anonymous print made sometime after 1808 tackles a similar subject to the one addressed by Goya in this print (National Chalcography Museum, Antonio Correa Collection, Madrid, inv. 1609). It portrays the heroism of the women of Aragón as they take arms to defend their loved ones. The scene shows a woman next to a cannon as she reaches for the gunpowder, ready to load it. At her feet there lies the lifeless body of a man. Both Goya and the unknown author of this other print tell a similar story, although the artist from Aragón confers on his work a heroic tone which is absent in the print from the Antonio Correa collection.

It is also possible that the anonymous print inspired another by Fernando Brambila (1763-1834) and Juan Gálvez (1774-1847) depicting the Portillo Gate battery (1812-1813, Lázaro Galdiano Museum, Madrid), in which we can see a woman loading a cannon, one foot resting on a dead body.

The triangular structure formed by the woman on top of the pile of bodies also recalls the painting The Raft of the Medusa (1818, Musée du Louvre, Paris), by Géricault (Ruán, 1791-Paris, 1824), not only from a formal point of view but also in terms of its content. In both cases we are presented with a scene of despair and death, but one in which a small flicker of hope still remains.

The etching plate is conserved in the National Chalcography Museum (cat. 258)