Sacrifice to Pan (Sacrificio a Pan) 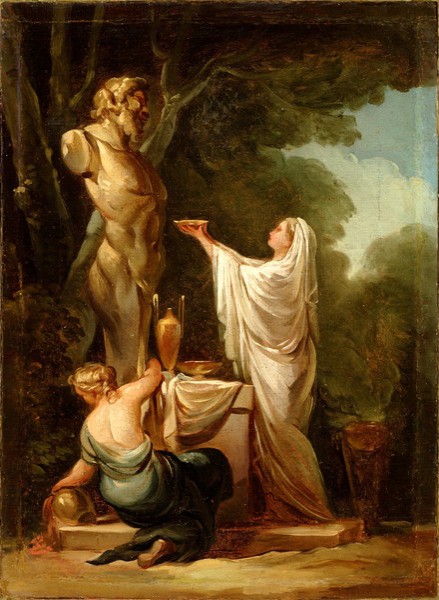 This work was produced during Goya's stay in Italy. José Milicua published the work for the first time together with its possible companion painting, Sacrifice to Vesta in 1954.

In 1913 it was auctioned in Paris as part of the Eugène Kramer collection, lot number 106, and was bought by Maurice Boilloux Lafont. In 1953 it was acquired by a Swiss private collector. Later it belonged to the collection of José Gudiol, and then to his heirs until it was later acquired by its current owner.

The scene is set in a forest, where we can see a priestess proffering a golden bowl to the statue of Pan, god of fertility and masculine sexuality. At the foot of the sculpture there is an altar upon which there are other recipients used in the libation rite. A young woman who is bending down with her back to us is handling the pitcher of wine.

It has also been argued that the painting might also represent the minor god Priapus, since Pan was usually portrayed with goat's feet, arms and hands. Here we have a herma, which was commonly used to represent Priapus, the god of fertility of the land.

There are some doubts as to the authenticity of this painting, which is traditionally paired with Sacrifice to Vesta. While the works shared a common provenance until recent times, and their mythological character and Roman details link them, it is also true that the canvas seems to have been deliberately stretched to make it the same size as its supposed companion work. Moreover, there is a second version of this work (known to have been in a Parisian private collection in the 1970s) which seems not to have been painted by Goya, in which the god appears to have been considerably altered, adding some elements associated with Pan.

If this work is indeed by Goya, then it would doubtless have been painted - as experts agree - during his stay in Rome, as one of the quickly executed paintings which the artist produced to pay for his upkeep.

For more information on this kind of work, see Sacrifice to Vesta.