Sacrifice to Vesta (Sacrificio a Vesta) 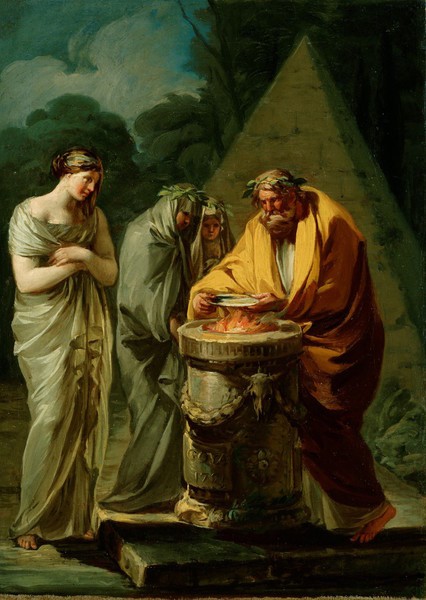 This work was produced during Goya's stay in Italy. José Milicua published the work for the first time together with its possible companion painting, Sacrifice to Pan in 1954.

In 1913 it was auctioned in Paris as part of the Eugène Kramer collection, lot number 106, and was bought by Maurice Boilloux Lafont. In 1953 it was acquired by a Swiss private collector. Later it belonged to the collection of José Gudiol, and then to his heirs until it was later acquired by its current owner.

Sacrifice to Vesta has a typically rococo feel in the colour scheme, although its composition is rather more classical. We can see the figure of a priest celebrating a fire ritual in order to invoke Vesta, the goddess who protected the family and the heat of the hearth. He is accompanied by three vestal virgins, young priestesses in charge of keeping the fires dedicated to the goddess burning at all times. The girl dressed in white on the left is being initiated, and will vow to remain a virgin for thirty years, thus renouncing her fertility. The figures are depicted outdoors, with a pyramid in the background which is reminiscent of that of Caius Cestius.

Similarities have been noted between the composition of this work and those by other authors, such as the terracotta by the French sculptor Alexis Loir, which might have used a drawing by Jean Barbault (today located in Albertina, Vienna) as a source. Likewise, similarities have been found with Sacrifice of Polixena by Domenico Corvi and Sacrifice to Diana by Taddeus Kuntz, a Polish artist in whose house Goya stayed in Rome.

These small paintings were destined for a quick sale. Goya would have produced them in order to pay for his upkeep in Italy, since he was not receiving a study grant. In general, they were tailored to the client's taste, who also sometimes directly commissioned the work. They bring together features of the different trends being followed in Rome at the time. When Goya was visiting Rome there were also French students living there who received grants from the French Academy (with them they brought the rococo influence). The artist was also inspired by the work of well-known Italians such as Giambattista Tiepolo and Domenico Corvi.

These foreign elements have caused some doubts about the authorship of this work and its pair, and they have been omitted from some publications which discuss the artist's Italian period. Despite this, the majority of authors do recognize the works, above all taking into account the difficulty of forging a signature such as that which appears on the altar. The signature fits in perfectly with the master's style: Goya knew exactly how to introduce his signature in surprising ways, and did so in a number of his works, as Milicua points out. We are, therefore, presented with a work and its supposed companion painting which are rare in Goya's output and of undoubted interest.