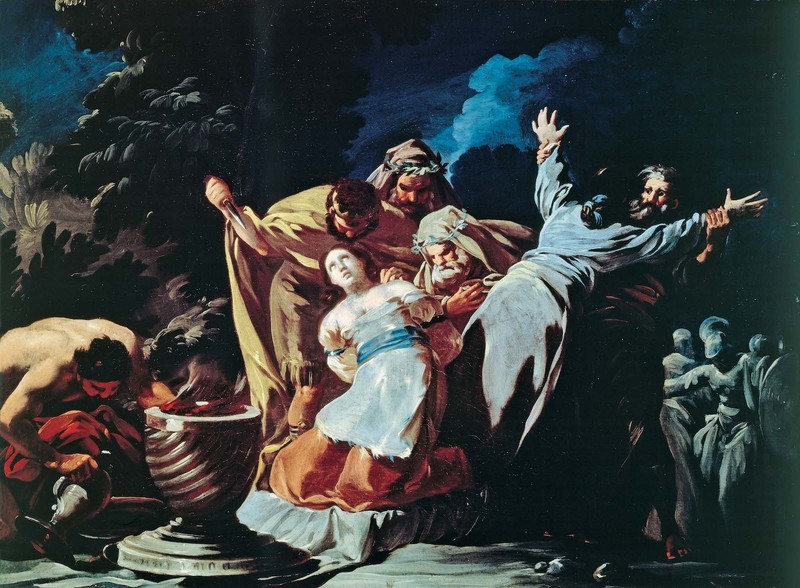 This work belonged to a trader from Seville. In 1965 it was acquired by the Várez Fisa Collection in Madrid.

The painting's theme was identified by A. E. Pérez Sánchez, who rejected the interpretation of the image as the sacrifice of Iphigenia, a pagan subject. Jephthah, captain of the Israelites, prepares to kill his own daughter in order to fulfil his promise to God that, should he be victorious against the Ammonites, he would offer as a holocaust (burnt offering) the first person that came to meet him on his return to the city of Mizpeh. He is met by his daughter, but fulfils his promise, nevertheless (Judges, 10, 6-18, and 11).

The story of Jephthah was much represented during the 17th century in images focusing on the soldier's homecoming and the sacrifice, which is the moment also chosen by Goya. The image is full of drama, embodied in the gestures of the figures, and the use of chiaroscuro, which illuminates the victim. The young woman, who is still a virgin, is depicted surrounded by three priests, while a woman attempts to stop the desperate Jephthah. In the background, a warrior with his head held low painted in grisaille similar to that of Goya's Hannibal, symbolizes the distress of the lover who will never consummate his love with the sacrificed virgin.

This scene is linked to the work Lot and his Daughters with which it shares many similar features in terms of dimensions and composition. Moreover, its subject and technique link it to a set of four biblical scenes featuring Moses and Isaac, as well as Jephthah, attributed to Goya but known only through photographs of the works.

Guidol not only gives incorrect measurements for the work, but also dates it as being from Goya's first years in Madrid, claiming that at the time the artist worked on private commissions which had nothing to do with the Santa Barbara Factory: this makes it very difficult to reconstruct the true history of the piece. Nevertheless, today it is thought more likely that Goya painted this work before he moved to the Court, since its classicist forms fit better with the style of the years immediately subsequent to his return from Italy. The figures have much in common in their execution with those featured in the mural which decorates the Monastery of Aula Dei in Zaragoza.