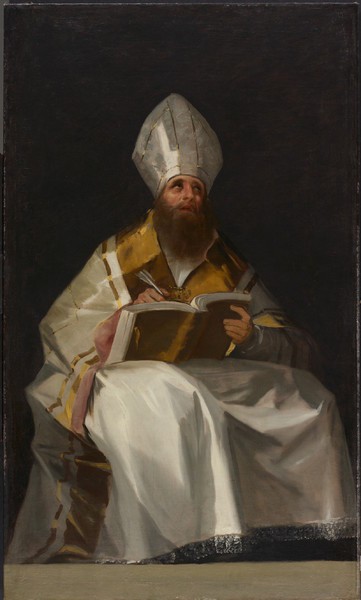 We know nothing about the circumstances which surround the commissioning of this series of four painting depicting the Fathers of the Church, which today are found in different locations.

Nevertheless, it is worth noting that the desire to give theology teaching a more scientific basis in the atmosphere of the new enlightened mentality led to a reassessment of study of the Bible and the writings of the Fathers of the Church, as reflected in some writings on educational material by important intellectuals such as Gaspar Melchor de Jovellanos, Pablo de Olavide, and Gregorio Mayáns. This backdrop may have had an influence on the decision of the body which commissioned Goya to do the work, whether this was a religious congregation or a private entity.

The painting representing Saint Ambrose was part of the Contini-Bonacossi collection in Florence. The family sold it to the Cleveland Museum of Art in 1970.

It is usually accepted that Goya painted this set of works following his trips to Andalusia (1792-3 and 1796-7), where he would have had the opportunity to see two paintings from Seville Cathedral dedicated to Saint Leander and Saint Isidore by Murillo, which may have had an influence on his depictions of the saints.

Saint Ambrose is sitting down, writing in a book he is holding and looking at the sky, as does Saint Augustine in another painting from this series. His gaze is less intense, but he is fully concentrated, and appears to be sustaining a divine dialogue. The figure dominates, monumental, jutting out against the dark, neutral background which contrasts sharply with the radiance of the white tones. The miter also reflects light on the left hand side of the composition. As in the case of the other paintings in this series - excepting the penitent Saint Jerome - we do not find the iconography we might expect, in this case the beehive and crosier.

In the case of Saint Ambrose, the influence of Murillo's Saint Leander is more than clear, although the composition is lacking the anecdotal elements of Murillo's work, resulting in a more timeless image in line with the aesthetic and religious spirit of the age.