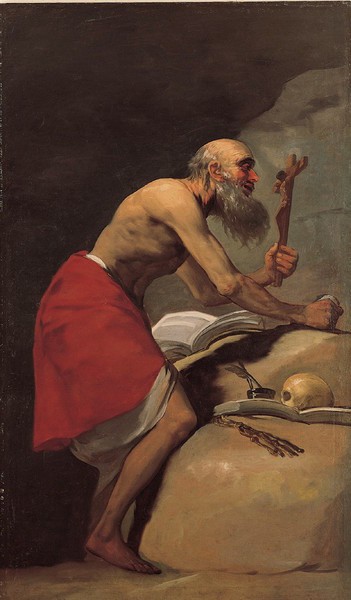 We know nothing about the circumstances which surround the commissioning of this series of four painting depicting the Fathers of the Church, which today are scattered in different locations (seeSaint Ambrose).

The painting of Saint Jerome belonged to the collected of Luis Vilches in Madrid, who sold it to the North American Stanley Moss. It was then passed to the institution where it is housed today.

Saint Jerome is depicted as a penitent in the moment when he retired to live in the desert for four years to dedicate himself to study and pray, far from temptation. This saint does appear with his traditional symbols: the crucifix of the penitent, the books and scribe's tools which make reference to his great work the Vulgata, and some laces, which with a calculated ambiguity allude to a cilice and the cardinal dignity of the saint.

Some academics find similarities between this work and the sculpture of Saint Jerome by Pedro Torrigiano which in Goya's time was preserved in the Monastery dedicated to the saint in Buenavista (now the Museum of Fine Arts of Seville). Ceán Bermúdez claims that Goya studied this piece for a long time, and considered it to be the finest work of modern sculpture.

Despite the evident connection this set of works has with Seville, Camón Aznar did not believe this painting belongs to the same series as the other three, suggesting instead that the corresponding Saint Jerome must have been lost. He dates the work as being from 1807. He does not justify this opinion, but it seems to be based on a difference in tones, the colours used for the other three works being warmer than those used here. The painting of Saint Jerome seems much cooler due to the grey of the rock on which he is leaning. Moreover, the critic believed that Goya would have represented the saint as a cardinal, against a neutral, dark background as is the case of its companion paintings. Perhaps the terracotta tones of Torrigiano's work influenced him to such an extent that he decided to change the style for this Father of the Church, using a more innovative pictorial language.

For a full history of this series of four paintings, see Saint Ambrose.