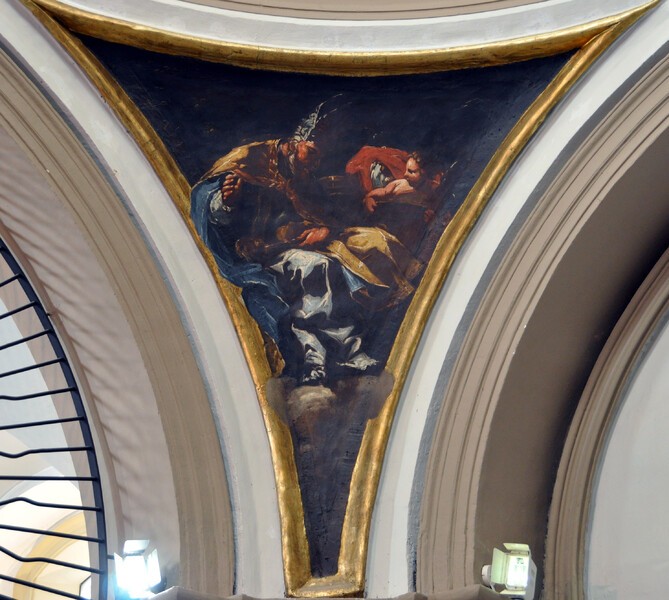 This set of pendentives is located in the presbytery of the Chapel of Nuestra Señora de la Fuente, an extension to the existing temple added in 1770. It follows that the paintings must have been produced after this time, and they are generally considered by academics to have been completed immediately prior to or following Goya's travels in Italy from 1771 to 1773. However, there is no documentary evidence attesting the authorship or chronology of the works, although the there was a rumour among the residents of Muel that a receipt or record of payment made to Goya for this commission did exist.

During the Spanish War of Independence, the chapel suffered damage that did not affect these paintings but did make repairs necessary in 1817.

Although in 1927 there was already a record of the existence of these pendentives and their link with Goya, the attribution was only officially established in 1935 in a report produced by various members of the Royal Academy of Fine Arts of San Luis in Zaragoza following a visit made to verify the state of conservation of the works. Three years later in an article published in the magazine Aragón José Galiay confirmed the attribution, which has been maintained until the present day and very rarely subjected to critical speculation.

As in the case of the Church of San Juan el Real in Calatayud - albeit with some differences in the iconography - these pendentives represent the four Fathers of the Western Church on a dark blue background, seated on clouds which overflow subtly into the golden frames and accompanied by small angels. Due to the smaller available space, the setting is more limited. The discrepancies or errors in the iconography are especially notable in the case of Saint Augustine (San Agustín), who in this case does not carry the flaming heart in his hand; Saint Jerome (San Jerónimo), depicted as a bishop and not accompanied by the lion as in other depictions; and Saint Gregory Magnus (San Gregorio Magno) whose papal tiara and cross have been replaced with a bishop's miter and crosier.

Despite these variations, which have led some critics to propose the theory that these paintings are meant to represent two Fathers of the Western Church and two of the Eastern Church, the main differences are to be found in artistic and stylistic choices. Firstly, for these works Goya mainly worked in oil directly on the wall, a technique that he also used for the oratory of the Palace of the Counts of Sobradiel in Zaragoza and the Life of the Virgin located in the Church of the Monastery of Aula Dei. Perhaps for this reason the colours used are more varied and vivid, the brushstrokes broader and sketchier, free-flowing, but applied with more care.

The depiction of Saint Ambrose is that which has the most in common with the painting of the same name in Calatayud. The saint appears almost side-on to the viewer, seated on a throne of clouds and dressed in pontifical robes with a golden cope, miter and bishop's crosier. He is reading a book which is held up by a small angel. His right hand is raised, while the left holds the crosier in his lap.

This pendentive occupies the corner of the Gospel side furthest from the main altar.

The painting was restored in 1958 by the Spanish Service for the Defence of National Artistic Heritage (Servicio de Defensa del Patrimonio Artístico Nacional) and in 1996–97 by the company Arte y Ciencia, S.L.