Serie
Oval paintings for the pendentives of the parish church of San Juan Bautista in Remolinos, Zaragoza (1/4) 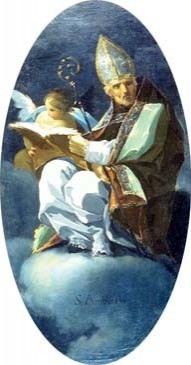 The Church of San Juan Bautista in Remolinos, a classicist baroque building which houses the four oval paintings on canvas in its pendentives, also carries an inscription on its entablature documenting the completion of the church in 1782. However, it is possible that these oval paintings were originally designed for a previous location, given the reduced scale of the figures, the chronological issues regarding style which they present, and the suspicion that the original paintings were trimmed in order to adapt them to the oval format, doing away with some of the original elements of their composition.

The attribution of these works to Goya has its roots in a chance event: in 1915 the work entitled Saint Augustine came away from its corresponding pendentive, at which point the priests of the church, J. Pablo Aznárez and José Castro y Marcellán, drew attention to similarities with the Goya paintings housed in the Monastery of Aula Dei in Zaragoza. They took the paintings to Zaragoza where they were studied by experts including Javier García Julián, who in 1923 declared them to be Goya's work. In 1924, the painter Zuloaga visited Remolinos along with the "Amigos de Aragón" arts society, who also gave their expert opinion that the work was indeed by Goya.

This set of four oval paintings from the parish church of Remolinos is of a decidedly rococo style, albeit distilled in baroque tradition, as evidenced by the movement and shine of the fabrics, the elaborate gestures, and the use of clouds on which the figures float. The figure representing Saint Ambrose is depicted sitting on clouds, wearing a bluish miter bordered with flowers and a green cope with red lining. His clothing is of an intense, shining white and falls in folds which generate deep shadows. He has a distinctly severe gaze which is directed above the viewer's shoulder, and he is shown holding a bible and crosier. The saint seems oblivious to what the angel who accompanies him is pointing to in the book.

In comparison with the Fathers of the Church which appear in the pendentives of the Chapel of la Virgen de la Fuente in Muel, Zaragoza, also attributed to Goya, it is considered that those of Remolinos are earlier and less developed in style, despite the fact that both series feature the same iconography.

The inscription below each of the four figures may have been forged in order to facilitate an identification which seems incorrect from the perspective of orthodox iconography, at least in the cases of Saint Jerome, who should appear as a cardinal or penitent, and Saint Gregory Magnus, who should be dressed as a pontiff. The depiction of Saint Augustine should also feature a flaming heart. It is, therefore, very uncertain that the artist's original intention was to represent the so-called Four Fathers of the Latin Church, even though no academic has questioned the matter with the exception of Borrás, who proposes the possibility that two of the Fathers represent the Great Doctors of the Western Church while the other two are of the Eastern Church, just as Bernini had placed them supporting the Cathedra Petri (or throne of Saint Peter) in the Vatican. Another plausible theory is that the models for the four bishops painted in Remolinos and Muel derive from those painted for Francisco Bayeu in the church of the Convent of Jerónimo de Santa Engracia in Zaragoza, which disappeared during the Spanish War of Independence, and which, according to Ceán Bermúdez, represented the Holy Bishops Valeri, Braulio, Prudencio, and Eugenio.

The whole series underwent restoration work carried out by Teresa Grasa and Carlos Barboza in 1989 with a view to their inclusion in the Venetian exhibition of Goya's work.