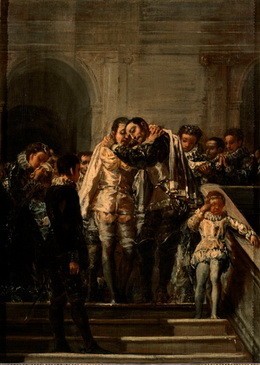 This is the sketch for the painting located on the left-hand side of the chapel of Saint Francis Borgia in Valencia Cathedral.

It belonged to the collection of Mr. Francisco Acebal y Arratia and later passed to the Marchioness of Santa Cruz in Madrid. The sketch remained there until it was acquired by its current owner. Its history has always been linked to that of its companion sketch for Saint Francis Assisting a Dying Man.

This sketch shows almost no variations in relation to the definitive work, and has the same number of figures, the only difference being that one of the saint's daughters is replaced by a gentleman. The composition also follows the same schematic lines: the weight of the horizontal frieze is offset by the pyramidal point which is created by the saint and his heir.

The differences to be found lie in painting technique and some fine details. The brushwork is looser in this cartoon, with many light white touches which illuminate the figures' clothing. He has not skimped on the emotional intensity of the scene in this sketch: indeed, the feeling captured in this version is moderated slightly in the definitive painting, which has more monumental proportions.

The balustrade on which the child is leaning has been elevated to reduce any abruptness in the perspective, while in the background architecture the arches, ionic columns, and entablature have been substituted with a single arch whose outer curve is bordered by a wide band featuring horsemen sculpted in relief.

It was lined in an old restoration.