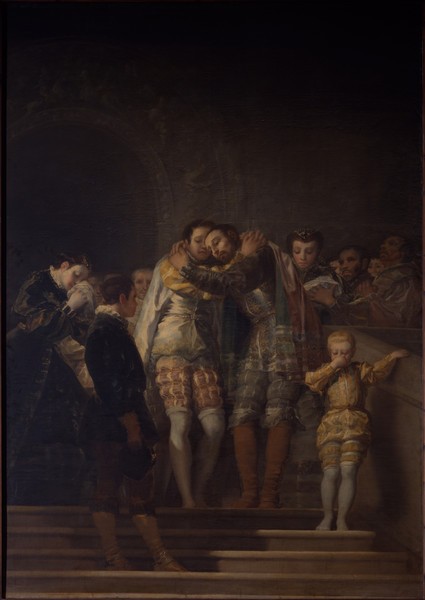 Between 1787 and 1788 the Countess-Duchess of Benavente and Gandía (and Duchess of Osuna) sponsored the renovation of the chapel under her patronage in Valencia Cathedral. The chapel is dedicated to Saint Francis Borgia, her illustrious ancestor, who was the Duke of Gandia and Marquis of Lombay. The first artist to work on the chapel was the Valencian painter Mariano Salvador Maella, author of the main painting of the altar, Conversion of Saint Francis Borgia. Later, Goya was commissioned to paint the two lateral paintings. On 16 October 1788 the paintings must have already been finished, since on this date Goya issued the Duchess with a bill for the work to the sum of 30,000 reales.

The image brings together a considerable number of figures who have gathered at the gates of the palace to say goodbye to Saint Francis Borgia, who was moved by his sight of the decomposed body of the beautiful Empress Isabel of Portugal - whose remains he accompanied to Granada on the orders of Charles V - to join the Company of Jesus. Following the death of his wife in 1551, he renounced his worldly possessions.

The composition is arranged horizontally, almost like a frieze. Nevertheless, the artist has created various planes of depth. The saint, embraced by his son and heir, is placed at the centre of the image; he is the focus of the gaze of the other relatives and servants in the painting. Goya once again uses a set of steps to position his figures above the viewer, increasing their monumentality. It might be the staircase leading up to the palace of the Duchess in Gandía, depicted with some artistic license.

The figures seem to have been painted from life studies, perhaps using the same models he employed for the painting Sermon of Saint Bernardine of Siena, or even members of the Osunas' social circle. It has also been noted that one of the men in the background may well be a self portrait, although this seems to be a reflection of the fact that the artist actually does appear in the painting of Saint Bernardine.

The very dark ground accentuates the chiaroscuro between it and the figures. The tears that dampen the cheeks of many of those present are in keeping with this rather dark atmosphere. Guidol also comments that the architecture in the background heightens the pathos of the scene.

The most striking feature of the work is the effort the artist has made to create textures, with carefully executed reliefs and ridges. Goya has chosen to dress his figures in the fashion of the era of Philip III, although he has omitted the ruffs which appear both in the preparatory drawings and the sketch for the painting, since these collars came into fashion at the end of the 16th century, some years after the Saint's death. The anachronism is repeated on various other occasions, since Goya used this fashion as a constant reference for historical paintings.

Certainly, the look of this painting approaches that of the great historical paintings produced by the Romantics in the following century.

The canvas suffered damage during the fire in the cathedral of 1936, but was fortunately saved. It was restored and replaced in its original setting.