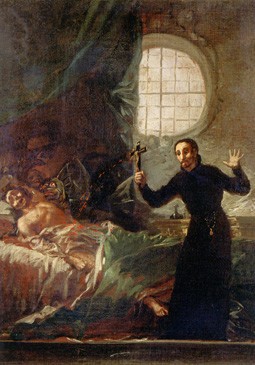 This is the sketch for the painting located in the right-hand side of the chapel of Saint Francis Borgia in Valencia Cathedral.

It belonged to the collection of Mr. Francisco Acebal y Arratia and later passed to the Marchioness of Santa Cruz in Madrid. The sketch remained there until it was acquired by its current owner. Its history has always been linked to that of the cartoon of its companion painting Saint Francis Saying Goodbye to his Family.

The scene essentially maintains the same composition that we see in the definitive work; however, there are some differences in this sketch which make it a more tense and anguished piece. The monsters in this sketch are more terrifying, while in the final piece they acquire a more human aspect, though they retain their brutish nature. The impenitent twists more violently, clenching his fist, his legs shaking, as expressed by the highlighting Goya has applied to the green bedcover. The saint is placed closer to the sick man, almost opposite the viewer, looking at the floor in order to avoid the horrible appearance of the man who will be exorcised with the miraculous blood of Christ which spurts from the crucifix. Plaster moulding decorates the window with cross arms which would not appear in the final canvas.

The red ground of the canvas is visible in many sections of the painting, above all in the area of the bed.

According to Wilson, this is an earthly composition which was made more elegant to decorate Valencia Cathedral, although the definitive work and its companion painting mark a change in Goya's religious work, which acquires a more realistic air despite the addition of monsters.