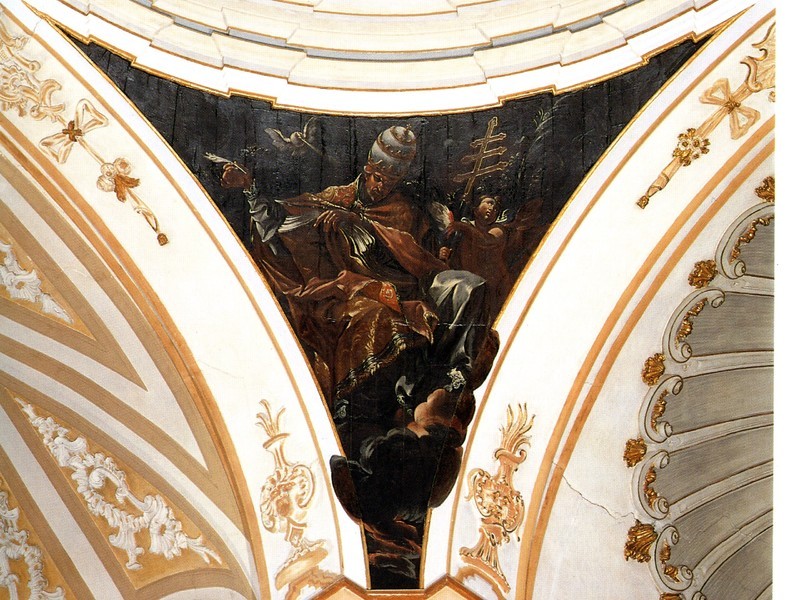 These pendentives were commissioned in the context of extension and renovation works to the architectural structure and interior decoration of the Jesuit Church of Calatayud dedicated to Our Lady of the Pillar which were carried out between 1747 and 1767, mainly thanks to funds bequeathed by Joseph Ximeno, the Vicar of the Church of Ateca in Zaragoza, as well as some private donations.

We know from the bequest accounts that the work was commissioned to a painter from Zaragoza with the nickname el Lancetero (who we can identify as Francisco Bayeu) at the end of 1762, although preparations for the pendentives were delayed until 1766. Since Bayeu had to travel to Madrid in 1763 to work under Mengs, some specialists have posed the theory that the commission was passed on to Bayeu's disciple, Francisco de Goya, who would have painted the pendentives around 1766 shortly before the expulsion of the Jesuits in April 1767 using some sketches Bayeu had produced for the project in what would be his first commission from an official institution. Goya's stay in Calatayud has also been linked with a time when he is supposed to have fled Zaragoza following his involvement in the so-called motín del pan ("bread riots") or motín de los broqueleros ("disputers' riots").

Nevertheless, there is no conclusive proof regarding the author of the paintings - or even the chronology traditionally assigned to them.

The paintings were first attributed to Goya in 1984 by José M. Arnaiz and Rogelio Buendía, and have generally been accepted as his work by historians ever since.

In contrast to other similar series attributed to Goya (those of Muel and Remolinos), the pendentives of Calatayud depict the four Fathers of the Western Church accompanied by their saints' attributes and traditional iconography, which are depicted in great detail. Saint Gregory Magnus is shown wearing the papal tiara and triple-bar cross, writing in a book inspired by the Holy Spirit who appears by his side in the form of a dove. Saint Ambrose is dressed in a pontifical robes with a bishop's miter and crosier, reading a book which is held by a small angel. Saint Jerome, bald and bearded, wears cardinal's robes and writes in a book with a quill. At his feet there is a lion. Saint Augustine, also dressed in episcopal attire, is depicted with an expression of ecstasy, his arms extended, and a flaming heart in his left hand.

The four figures are seated on clouds which overflow their architectural frame. The background is dark blue. Despite having undergone restoration work these paintings as a group have a rather dirty aspect, doubtless due to the distortion of the bitumen or asphalt applied to the panel. They are characterized by hard lines and well-defined outlines, with highlights applied for effect at the edges and a colour palette of cool tones. The technique employed is somewhat sketchy in nature, using wide and vigorous brushstrokes which are not always applied judiciously.

Saint Gregory Magnus is seated on a throne of clouds dressed in a vast cape in golden hues with a papal tiara and cross. He is in the middle of writing with a quill in a great book which he holds in his left hand, inspired by the Holy Spirit that manifests itself to his left in the form of a dove. A small angel on the left holds the triple-bar cross.

This pendentive occupies the corner of the Evangelical side closest to the presbytery.

The paintings were restored in 1985–86 by Carlos Barboza and Teresa Grasa as part of work commissioned by the Government of Aragón.