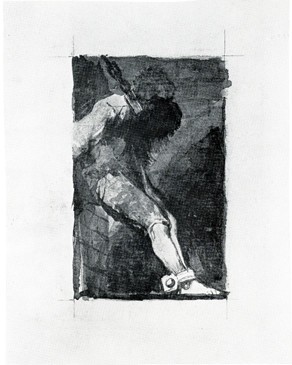 This work belonged to Javier Goya and then to his son, Mariano Goya. It later entered the Valentín Carderera Collection before finally reaching the Prado Museum.

There are no major differences between this drawing, which is the other way round to the finished work, and the print. In it we see the prisoner, in profile, secured to the wall by a chain around his neck and by shackles round his feet. He is dressed in ragged clothes and his head has fallen forward, hiding his face behind his hair.

Goya has described his surroundings only superficially, in less detail than in some of his other preparatory drawings, although it does seem that he already had a very clear idea of how the finished work would look even at this early stage.

There are smudges of sanguine on the reverse, around the edge of the drawing. This tends to happen when the printmakers trace the drawing onto the copperplate.