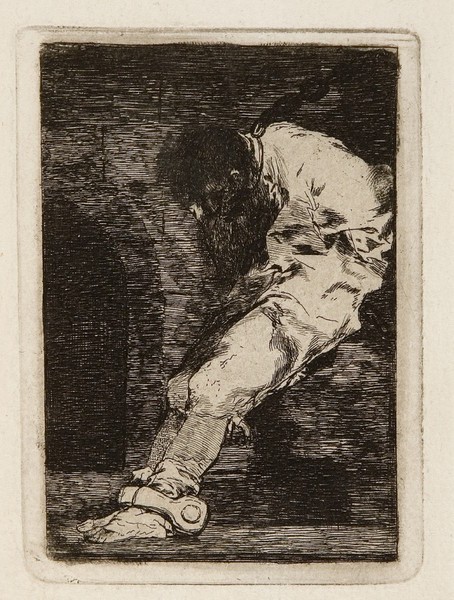 See The Blind Guitarrist and The custody is as barbarous as the crime.

In a darkened cell a prisoner is bound to the wall by chains around his neck. His arms are tied behind his back and his feet are locked in a large shackle. The prisoner's body is curved in a line that starts at his feet, which are resting on the floor, continues up to his slightly bent knees, and finishes at his torso, which is slumped forward. His face is in shadow, concealing his features from the viewer. This awkward posture is the same as that of the prisoner depicted in The custody is as barbarous as the crime. The ragged clothes of the man are lighter in tone, possibly an allusion to his innocence.

Goya has described the space using short, compact horizontal lines, whilst the face of the accused has been rendered using a dense grid-like pattern, making it impossible for us to see his features.

The title of this print sheds some light on the story of this prisoner, who is most likely awaiting his execution, and expresses the inflexibility and inhumanity of some of the punishments that the laws of the time subjected prisoners to. This etching must have been made during the same period as The custody is as barbarous as the crime and The custody of a prisoner does not call for torture and is related to various prints from the Disasters of War series, in which Goya depicts scenes of prisoners condemned to death, clearly demonstrating his opposition to capital punishment.