All This and More (Tanto y mas) 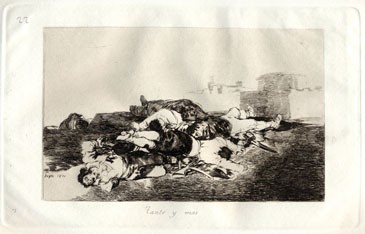 This is one of the three dated prints in the series along with Treat them, then on to other matters and Charity.

In the middle of a landscape in which we can make out some architecture in the background, Goya has etched a group of corpses piled up on the ground. The violent postures of the bodies and the gaping mouths of many of the dead accentuate considerably the drama of the scene.

The painter has used short, horizontal etched lines to convey the ground on which the lifeless bodies are found. This dark area contrasts with the white of the corpses' faces and limbs, as well as the light-coloured clothing worn by some of them.

This print might be related with the previous one, no. 21, It Will Be the Same and the following print, no. 23, The Same Elsewhere, which also depict piles of dead bodies. In fact, this image could be interpreted as underlining the futility of the compassionate gesture depicted in print no. 21.

Eleanor Sayre has linked All This and More with the battle that took place during the first siege of Zaragoza in August 1808.

The plate is stored in the National Chalcography (cat. 273)