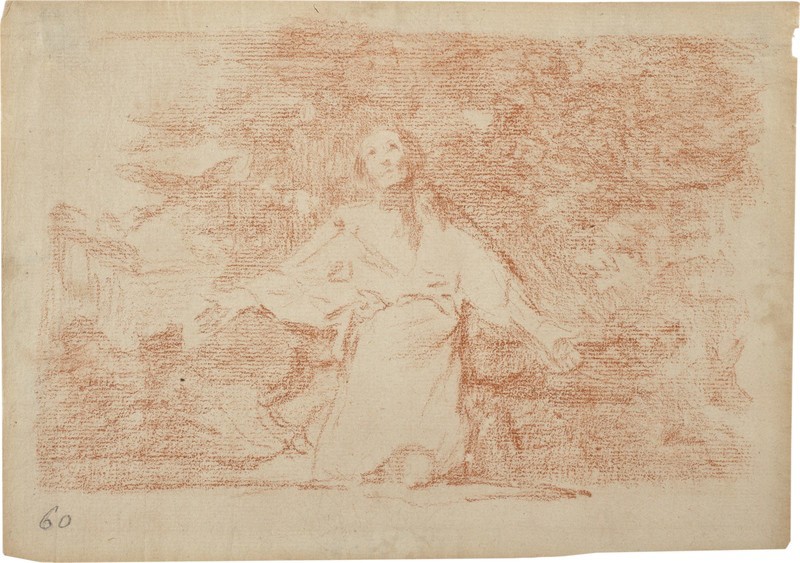 We do not know why Goya wrote the number 60 in the lower left-hand corner. It may have served as a reference number of some kind.

Using light traces of sanguine, Goya has traced the outline of the kneeling man, his arms flung out to his sides, who was later to appear in the first print in the Disasters of War series.

When compared with the final print, we see some differences, chiefly concerning the way in which the artist has treated the background of the scene. In the drawing, this area is much paler than in the print, and Goya has sketched out a landscape here which is practically imperceptible in the print. On the left-hand side of the drawing, in the distance, we can see some buildings which were not carried over to the print. Furthermore, in the upper left-hand corner of the drawing there is an area of brightness, a lingering shred of hope, whilst the monstrous figure that we can just make out in the print is, in the preparatory drawing, even less evident.

As for the kneeling man, Goya has covered his chest with a gown in the drawing, whilst in the print he has opted to show much of the torso laid bare, perhaps in an attempt to lend more drama to the pose.

In short, a comparison of the two works allows us to see how, in the final print, Goya set out to heighten the image's sinister, oppressive side.