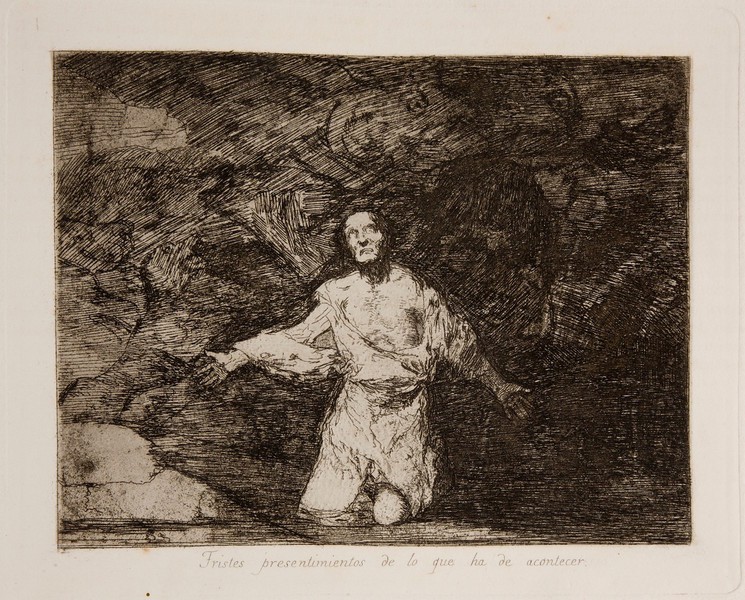 The exact start and finish dates for the series are unknown, but we can assume that it was begun in around 1810, since this date appears on two of the prints, no. 22, All this and more, and no. 27, Charity. Goya probably produced the first 64 of his prints on the theme of war between that year and 1814, whilst the others, his Emphatic Caprices (Caprichos enfáticos), were most likely made between 1820 and 1823.

None of the titles of the prints in the Disasters of War series were initially etched into the metal plates. Instead, Goya wrote them by hand on the first impressions, the only ones we know to have been made at the time. Before leaving Spain for Bordeaux in 1824, Goya gave these prints to his friend and ilustrado, Juan Agustín Ceán Bermúdez (Gijón, 1749-Madrid, 1829). The series later belonged to the descendants of Valentín Carderera and then to Tomás Harris, who donated it to the British Museum in London, where it remains to this day. The copperplates remained in the possession of Goya's son, Javier, who in 1862 sold them to the Royal Academy of Fine Arts of San Fernando. Later, Jaime Machen Casalis offered them to the National Chalcography Museum. It should be pointed out that plates 82 and 83 were left in the Quinta del Sordo after Goya travelled to Bordeaux and were only subsequently reunited with the rest of the series thanks to a donation by Paul Lefort in 1870.

In 1863, whilst the copperplates were at the Royal Academy of Fine Arts of San Fernando, a new edition of the Disasters of War was printed. It was then that the title of each print was engraved on to its copperplate, exactly as in Ceán's edition, where they were written in Goya's own hand. At this time, the academy also decided to change the title of the series to the much shorter one by which it is known today: The Disasters of War (Los Desastres de la Guerra), thereby broadening the scope of the work. Between 1863 and 1937, a further six editions of prints no. 1 to no. 80 were made. Numbers 81 and 82 became separated from the others, and some proofs were made from them in around 1870 and again between 1957 and 1958.

Given the fiercely critical nature of its images, it should come as no great surprise that Goya's series of prints on war was not distributed at the time it was made. In the first two parts of the series, dedicated to war and its consequences, the Aragonese artist did not take the side of either of the warring factions but instead denounced everything that war stood for. In the part of the Emphatic Caprices, he went on to produce a harsh, scathing criticism of the prevalent political regime.

The first print in the series was conceived as the point of departure for all of the images that were to follow. In its second state proof, we can see some touches of burin which Goya has used to pick out the man's hips and to deepen the shadow below his left-hand sleeve. This proof, printed in dark greyish-brown ink, was made before additional drypoint and burnishing work was applied, and before the lettering was added.

The likely catalyst for this series of prints was the Spanish War of Independence (1808-1814), which led the artist to reflect more broadly on violence and its consequences. This was a long and painful conflict which signified not just a struggle against the advancing troops of Napoleon but also a fracture in the Spanish people, who were divided between those supporting the French and those who remained loyal to the Spanish monarchy, firmly anchored in the values of the Old Regime.

Goya was court painter at the time, living in Madrid, and so witnessed many of the events of this war up close. He visited other fronts, too. From 2 to 8 October 1808, at the request of General José Rebolledo de Palafox y Melci (Zaragoza, 1776-Madrid, 1847), Goya was sent to Aragón to bear witness to the Sieges of Zaragoza. Despite the veracity of some of the scenes in this series, it is difficult to imagine Goya working in the places where the events took place or even making notes and sketches in the midst of the struggles. It is more likely that he simply saw some of the places where the conflict took place and then later elaborated in his mind the scenes that he would later depict in the prints.

The series is divided into three parts. The first includes prints no. 1, Sad presentiments of what must come to pass, to 47, This is how it happened, describing the whole spectrum of the horrors of war. The second part comprises the prints between no. 48, A cruel shame! and no. 64, Cartloads for the cemetery, portraying the consequences that war has upon the population, in particular hunger and famine. Last of all, in prints 65, What is this hubbub? to 82, Will she live again?, Goya creates his so-called Emphatic Caprices (Caprichos enfáticos), in which he criticizes the government of Ferdinand VII, which restored the fundamental principles of the Old Regime once the war was over. Some additional small groups of prints also exist, which these help us to make sense of the images or underline their content, and we will refer to these in the corresponding records.

Almost all of the prints are preceded by a preparatory drawing, of which 65 exist in total, and all of which reveal very few differences when compared to the finished etchings. Goya may have spent a long time thinking about each image before starting work on it and his vision of the scenes may have been so clear to him that he wanted to keep any changes in the final designs to a minimum.

From a technical point of view, Goya introduced a new element into this series with his use of lavis, otherwise known as open-bite etching. This is where the etching acid is applied with a brush directly on to the copperplate, with no protective ground. This technique provides soft tones and dulls the brilliance of the white areas of the paper, but without any heavy shading. His sparing use of aquatint may have been a stylistic decision, and resulted in less picturesque, more aggressive images, using the visual language of etching, drypoint and burin, with some help from the burnisher.

Compared with his other series of prints, Goya had fewer material means to work with here, making his realization of the Disasters of War series a more complicated undertaking. This was due to the shortages brought about by the war and to the fact that Goya made this series for himself, without any kind of economic backing. In fact, prints 13, 14, 15 and 16 were made on two recycled copperplates which had previously contained representations of landscapes. Added to all of this was the shortage of resins and varnishes, as well as their poor quality, leading to foul bites in the copperplates.

Goya tackled the theme of war and violence from an angle which was absolutely unprecedented in the history of art. First of all, he chose to use the medium of print, which, whilst allowing a work to reach a far wider audience, inherently favours a more intimate form of expression. Furthermore, the Disasters of War series was not a commissioned work, but rather one that came about spontaneously. This allowed Goya to work with complete freedom, reflecting upon the Spanish War of Independence in particular and upon human violence in general. Goya thus makes a clean break from traditional representations of military conflict, where it is almost always the point of view of the victor being represented and where the suffering of the vanquished is hardly ever depicted.

One of the primary sources of inspiration for Goya's Disasters of War was Les Misères et les Malheurs de la Guerre, by Jacques Callot, published in Paris in 1633. This series of prints narrates the occupation of Lorraine during the Thirty Years' War and is one of the earliest examples in art of war seen from a more realistic perspective, portraying the horror and the violence head on.

Sad presentiments of what must come to pass, the print that opens the series, is an image of deep foreboding. Shrouded in darkness, which has been rendered using short diagonal lines packed tightly together, a kneeling man holds his arms open wide and looks up at the sky. In the depths of the darkness we can just about see, almost feel, a monstrous figure lurking, perhaps a personification of the terrible events that are approaching.

This character of the pleading main in the Disasters of War vividly brings to mind both Goya's painting Christ on the Mount of Olives and the figure of Saint Isidore the Labourer, one of the prints in the artist's series on religious themes. Just as this figure seems to be praying for a miracle to divert the catastrophe hanging over him, the survivor in The Shipwreck, adopts a similar posture, although in that case the figure is asking for help following a disaster that has already taken place.

In terms of technique, this print is close to no. 69,Nothing. We shall see, and to Caprice no. 43, The sleep of reason produces monsters. In all three cases we see a lonely central figure surrounded by a creeping darkness, where monstrous creatures lie in wait.

The etching plate is conserved in the National Chalcography Museum (cat. 252)