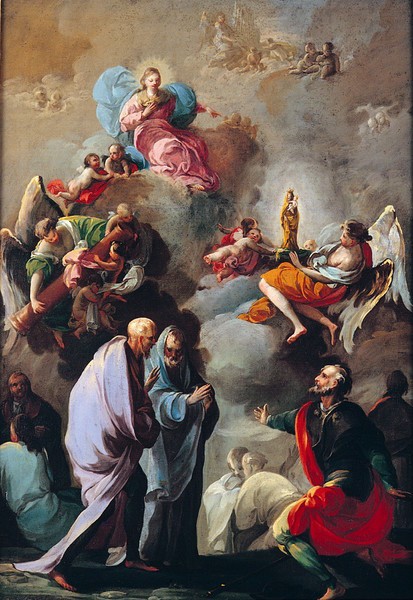 This painting belonged to the collection of the wealthy banker from Navarre, Juan Martín de Goicoechea y Galarza, friend and patron of a number of artists including Francisco de Goya.

It was inherited by María Pilar Alcíbar-Jáuregui y Lasauca, the second wife of one of the Counts of Sobradiel, appearing in a family inventory from 1867. The work then passed to the widowed Countess of Sobradiel, Ms. Carmen San Gil y Ollo, who sold it to its current owner in 1959.

The painting belongs to a pair of devotional pieces together with Triple Generation.

The coming of the virgin has been a recurring theme in painting since the 17th century. This representation has a clear precursor in the earlier painting which decorated the reliquary doors of the parish church of Fuendetodos (Zaragoza), the earliest example of a depiction of this subject by Goya. The composition is structured around the clouds on which the different holy groups are placed. On the highest of these clouds sits the Virgin, who is raising one hand to her breast while the other points to the image of the Virgin of the Pillar which is being carried by some angels. Opposite is another host of angels transporting the sacred column. In the foreground - the earthly plane, nearest the viewer - we find Saint James the Apostle and his disciples. The intense colours of their robes are striking.

The monumentality of the figures in the foreground, the luminous quality of the colours, and the general layout are key features of this work, which brings together the influences of Luzán, Giaquinto, and Bayeu. According to Gudiol, this work and its pair display the beginnings of the concept for the vault of the choir in the Basilica del Pilar, moving away from academism with the use of a less precise design.

We should not forget that these two works formed part of the collection of Goicoechea, along with other works. It has been suggested that the banker was actually the first admirer of Goya's work, as well as the first to collect it. Thanks to the correspondence between Goya and Zapater, we have a record of the friendship which united the businessman and the painter, who sent various signed works to his protector during his first years as a painter.