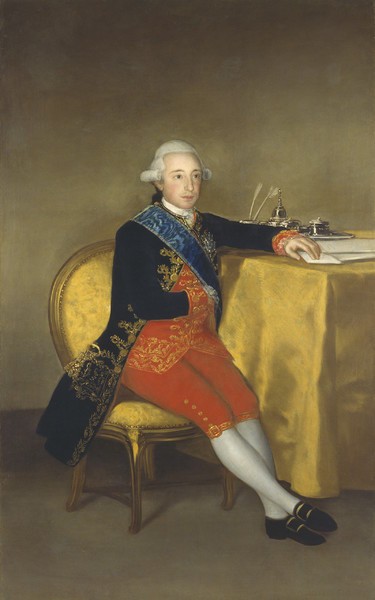 This portrait was paid for along with two others, according to the Banco de España receipt dated 30 January 1787: "To the Painter Goya for the portraits of the King, the Count of Altamira and the Marquis of Tolosa ... 10,000 reales de vellón."

Vicente Joaquín Osorio de Moscoso y Guzman was born in 1756. Member of a noble Galician family, he was one of the richest people of his time. He was one of the first directors of the Banco de San Carlos and a member of the San Fernando Royal Academy of Fine Arts; he also held the title of Marquis of Astorga and Deputy Mayor of Castile and the City of Madrid. The Count owned an important collection of artwork second only to the royal collection itself.

He is pictured sitting on a chair upholstered in yellow fabric which matches the tablecloth. The table appears to be unusually tall: in fact, according to accounts from the period, the Count was extremely short. He is dressed in a red waistcoat with gold embroidery, a black frock coat, wig, white stockings and black shoes with large buckles.

On the table there is a writing set depicted in minute detail. The sitter's serious, luminous face stands out against the neutral background.

The Count must have been quite satisfied with this canvas, as he later commissioned Goya to paint portraits of his family: those of his wifeMaría Ignacia Álvarez de Toledo holding their daughter Maria Antonia in her arms and of his two sons Vicente Osorio and Manuel Osorio.