And this too (Y esto tambien) 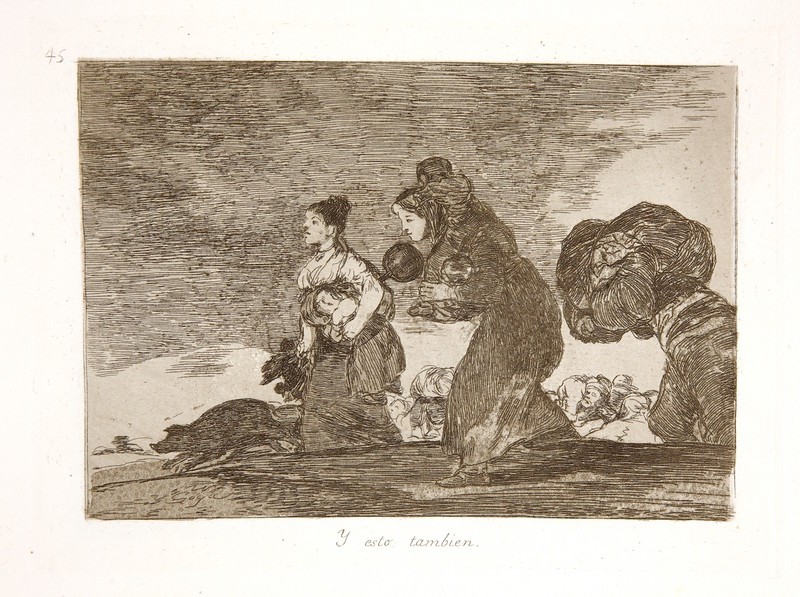 Various figures are shown fleeing from their homes at night. In the foreground a woman carries a child on her shoulders, while a little way behind her, also in the centre of the composition, another woman carries a child under one arm and a chicken under the other. In front of this woman is a pig that accompanies them in their flight. On the right-hand side of the foreground, the shadowy figure of a man is shown wearing a hat and carrying a large, heavy bundle on his shoulders. In the background we can see the faces of other figures that are also fleeing with their belongings.

The print is related to the previous work, no. 44, I saw it (Yo lo vi): in both prints Goya emphasises his presence as an eyewitness to the events taking place. This leads the viewer to the conclusion that in the case of the other works in the series the events depicted may be the work of the artist's imagination, employed to record events that he did not witness in person. Likewise, both print no. 44 and the present work deal with the same theme, since they show the relatively common phenomenon of abandoning towns during times of war, leaving settlements in the hands of the French troops that would pillage then abandon the towns. However, the prints do not show the same event or situation, since print no. 44 depicts a daylight scene, while that recorded in no. 45 takes place at night.

The print is a continuation of the set dedicated to fleeing which begins with no. 41, They escape through the flames (Escapan entre las llamas).