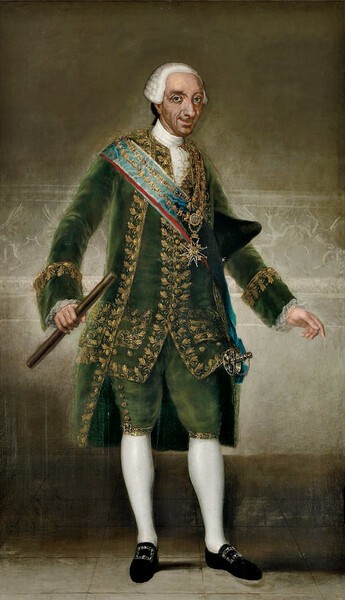 This portrait was paid for along with two others, according to the Banco de España receipt dated 30 January 1787: "To the Painter Goya for the portraits of the King, the Count of Altamira and the Marquis of Tolosa ... 10,000 reales de vellón."

The subject is depicted standing inside a room whose walls appear to be lined with fabric. He is wearing court dress: a green suit decorated with gold embroidery, a white shirt with frills at the cuffs, white stockings and black shoes with large buckles. On his chest he wears the Great Cross of his Order and the Golden Fleece. He has his tricorn hat under his left arm, while in his right hand he holds a sceptre. On his head he wears a powdered wig over a pigtail. His face bears the wrinkles which convey the passage of time and the worries associated with his reign, but he also has a kind look, wearing an expression at once sweet and melancholy.

According to various authors, this canvas was based on other portraits, since it is unlikely that the King sat for this particular work. The idea posed by Beruete and some other authors that this portrait was painted following the death of Charles III has been discredited, since the sovereign's face here is very similar to that of the painting Charles III in Hunting Costume, a privately owned work located in Madrid, which was carried out at a later date and displays many of the same features.

Some authors point to the clumsiness of the subject's pose, which suggest Goya was not entirely comfortable with this job due to it ceremonious nature: until now, he had only painted the portraits of the bourgeoisie or aristocrats, and never that of a sovereign.