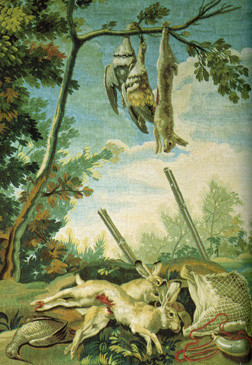 For the history of the whole series, see Wild Boar Hunt.

At some point between 1786, the date of the inventory taken by Livinio Styuck in which this tapestry cartoon was included, and 1834, when Vicente López completed a new inventory for the will of Ferdinand VII, this work disappeared and there has been no mention of it since.

The cartoon has been lost, its whereabouts unknown, but luckily the tapestry has been conserved (Madrid, Spanish National Heritage Board) and is depicted in the photo given here. This tapestry allows us to get a good idea of what the artist's original composition would have been like, without forgetting that modifications were sometimes made by the weavers.

We also have the description made by Vandergoten when he received the cartoon at the factory, in which he talks about several elements of the hunting still life hanging from a tree trunk and some hunter's harnesses. The tapestry we refer to is not the only one that could fit this description. Also belonging to the Spanish National Heritage Board is another, very similar one attributed to José del Castillo (reproduced in plate III of Arnaiz's study).

To this day, doubts persist regarding the authorship of this cartoon, since a variety of pieces with similar compositions have been conserved. In fact, Jutta Held has stated that this is a painting by Ramón Bayeu, thus giving him back the authorship granted by Stuyck nearly two hundred years earlier.